Mexico recorded their first victory over France and left the former winners facing a possible embarrassing early World Cup exit after a 2-0 win in their second Group A game.

Substitute forward Javier Hernandez beat an offside trap, raced into the box unchallenged and twisted his way past France keeper Hugo Lloris to put Mexico ahead on 64 minutes.

Wily forward Cuauhtemoc Blanco, 37, doubled the advantage from the penalty spot on 79 minutes after Pablo Barrera was brought down by Eric Abidal, sending his country’s fans wild with delight in a contrast to the glum French faces.

“I’m delighted. The goal is for the whole country,” Hernandez said on Thursday.

France, the 1998 champions, have just one point from two games and face hosts South Africa in their final pool game next week.

Even a win might not be enough for them to qualify and escape another disaster after their Euro 2008 flop.

Uruguay and Mexico, who top the group with four points each, will both qualify if they draw their match next week, and eliminate France and South Africa, who are both on one point.

Mexico coach Javier Aguirre was full of praise for his team after what he said had been a tight match.

“Whoever scored first was going to win. The goal made us feel calm,” the former Mexico international said, expressing his pleasure that the team’s style of bombing forward had paid off.

“We always try to be audacious to put the ball in the net. We do run risks,” he said.

France coach Raymond Domenech – who will be replaced by Laurent Blanc after the tournament – was downbeat after the loss which leaves his side with very little hope of making the knockout stages.

“I’m lost for words. It’s a real disappointment for those who believed in us,” France coach Raymond Domenech told French television channel TF1.

“There’s one match left. We’ll play for pride and hope for a miracle. We needed a draw to keep our fate in our hands and couldn’t get it.”

With their fate out of their hands, they will have to face their final match against South Africa without holding midfielder Jeremy Toulalan, who will be suspended after picking his second yellow card of the tournament.

The only sour news for Mexico was the first-half leg injury to lively forward Carlos Vela, although it was not immediately clear how long he might be out of action.

“I’m very worried for Vela and the team about his injury,” Aguirre said. 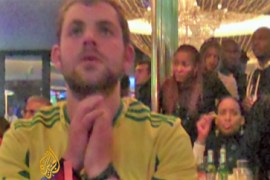 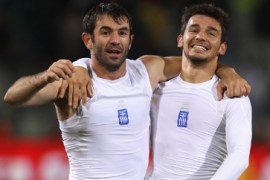 Greeks take advantage of Sani Kaita sending off to come from behind and beat Nigeria. 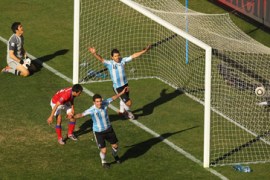 Argentines in ominous form as they go clear at top of Group B with 4-1 win at Soccer City.