Tottenham reached the European Champions League for the first time in their history as Peter Crouch scored late to beat Manchester City 1-0 – and deny City their own first appearance in the continent’s elite competition.

Roberto Mancini’s City needed to at least draw at Eastlands to take the race for fourth down to the final day but England striker Crouch broke the resistance of the Blues’ on-loan keeper Marton Fulop to head the winner on 82 minutes.

Tottenham finish at least fourth in the English Premier League and Harry Redknapp’s team could even go third above Arsenal if they win and the Gunners lose on the last day of the season.

Mancini, brought in by the club’s billionaire Abu Dhabi owner Sheikh Mansour bin Zayed Al Nahyan at Christmas in place of Mark Hughes to spearhead the club’s dream of becoming a major world power, has to content himself with a place in the Europa League – if he keeps his job.

Crouch headed home from close range on 82 minutes after Younes Kaboul had got the better of Craig Bellamy to leave City stunned as their bid to overhaul fourth-placed Tottenham was blown to pieces.

The England striker’s eighth goal of the season could be worth up to $75 million to Tottenham, who can now look forward to competing against Europe’s elite for the first time since the 1961-62 season.

Crouch’s effort left boss Harry Redknapp dancing a jig of joy on the touchline – before being drenched with a drinks cooler by his players during a post-match TV interview.

City, bolstered by the formidable spending power of their Arab owner, are threatening to change the hierachy of English football having spent more than $182 million on new players with plenty still to spare.

But the result was no more than the visitors deserved after dominating for large spells before Crouch pounced.

Crouch told Sky Sports: “Throughout the course of the season the boys have been fantastic, the whole squad and we managed to get fourth but we still have to qualify.

Redknapp was handed a massive boost before kick off when captain Ledley King was passed fit to play, while England winger Aaron Lennon was also recalled to the starting line-up.

He produced two weaving runs that eventually came to nothing but had the Tottenham back four scrambling to protect Heurelho Gomes’ goal.

Tottenham appeared content to soak up the pressure and hit Mancini’s men on the break.

With pace in abundance on either flank from Gareth Bale and Lennon, it seemed only a matter of time before the home side would find themselves stretched.

This was the case in the 18th minute when Bale’s deep cross to the back post found Crouch unmarked close to goal but his header from point blank range came back off the upright with Fulop stranded.

Moments later Redknapp’s men thought they had taken the lead when King powered a header past Fulop and into the back of the net, but referee Steve Bennett ruled it out after penalising the England defender for climbing on Gareth Barry.

Gomes was called into action at the opposite end on 27 minutes to deny Adam Johnson and keep the scores level.

Johnson picked up a loose ball 20 yards out and took aim before unleashing a raking drive only to see Gomes tip it wide.

The Brazilian goalkeeper was in the right place again on 35 minutes to rescue the visitors after Bale threatened to deflect Barry’s cross into his own goal, while Kolo Toure twice headed off target as City’s frustration began to mount.

Spurs kept pressing and Benoit Assou-Ekotto looked to have set-up the winning chance 20 minutes from time with a wicked cross from the left, but somehow the sliding duo of Defoe and Crouch both failed to make contact.

Crouch had another header saved by the impressive Fulop from close range.

But just as the game appeared destined to remain scoreless Kaboul managed to escape the attentions of Bellamy and pick out Crouch, who nipped ahead of Vincent Kompany to beat Fulop with a clinical finish to spark off wild celebrations in one camp and total despair in the other.

In the other match on Wednesday Fulham lost 1-0 at home to Stoke City.

Europa League finalists Fulham could do Spurs a favour by beating Arsenal on Sunday and help Tottenham leap beyond the qualifying rounds of the Champions League if they beat Burnley.

Stoke have their own role to play as they face Manchester United, who will hope to win and see Wigan draw or win at Chelsea for the Reds to claim a fourth straight title. 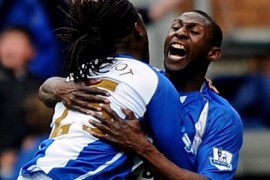 Latics relegate Hull with Gohouri goal ahead of title-deciding trip to Chelsea. 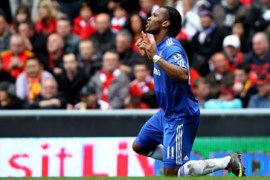 Title race down to the wire

Man Utd respond to 2-0 Chelsea win over Liverpool with slender defeat of Sunderland. 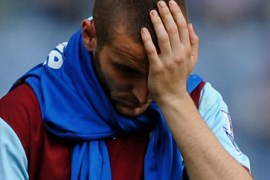 Burnley down as Chelsea go top

Londoners romp to 7-0 win over Stoke City as Burnley relegated after 4-0 thrashing. 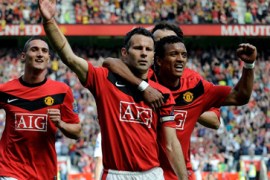 Giggs spurs United back to top

Welshman scores two as United leapfrog Chelsea with Rooney likely out for season.