Cristiano Ronaldo scored a hat-trick as Real Madrid went to Mallorca’s fortress of a stadium to carry home a comfortable 4-1 win that keeps them within a point of Barcelona at the top of the Spanish Primera Division.

With no margin for error after Barcelona crushed Tenerife 4-1 on Tuesday to open up a four-point gap at the top of La Liga, Real were rocked when Mallorca’s Aritz Aduriz scored after 16 minutes at the Ono Estadi on Wednesday night.

Mallorca have won 14 of their 17 previous home fixtures, but Ronaldo had saved Real with a last-minute winner at home to Osasuna at the weekend, and he took responsibility to lead the fightback by lobbing an impressive equaliser in the 26th minute.

Just after the re-start he stole in to put Real ahead and then he streaked in off the left flank to effectively seal the win in the 72nd minute. Gonzalo Higuain wrapped up the scoring with a superb lob.

Manuel Pellegrini’s side moved to 92 points, one behind Barca with two matches left to play, after having triumphed in what was considered their toughest game of the title run in.

Mallorca slipped out of Spain’s last Champions League qualification place down to fifth on 59 points, with Sevilla having earlier hammered Racing Santander 5-1 to climb on to 60.

Alvaro Negredo the net in the second minute, beating Anders Palop after the goalkeeper had stopped Jesus Navas’ hard shot.

Negredo finished the scoring in the 89th minute, sending a powerful left-footed volley home for his 11th goal of the season.

Navas, Diego Capel and Frederic Kanoute also scored for Sevilla, while Mohamed Tchite pulled one back for Santander.

Kanoute made it 2-0 in the 21st minute from the penalty spot after Santander defender Nasief Morris had tripped Capel. Navas made it 3-0 with a header at the far post from a cross by Capel on the left wing in the 46th minute.

A minute later, Capel beat the offside trap and Palop. Tchite narrowed the gap in the 61st before Morris was sent off for a second yellow card following a late tackle from behind on Capel in the 78th minute. 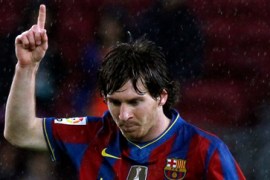 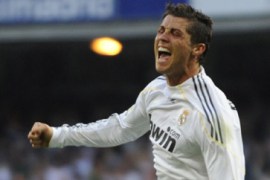 Real stay in pursuit of Barca 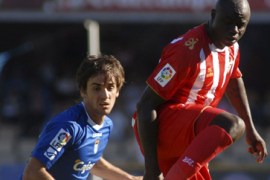