Imperious Inter Milan seized the first part of a potential treble by using all their might and muscle to overcome title rivals Roma 1-0 in a bad-tempered Italian Cup final.

Striker Diego Milito fired home from the edge of the area on 40 minutes in the fifth final between the sides in six years to register Inter’s sixth Italian Cup triumph.

Serie A leaders Inter, two points clear with two games left, are also battling Roma for the title and face Bayern Munich in the European Champions League final on May 22.

Roma captain Francesco Totti, who started the game on the bench, was sent off late on for a wild kick at Mario Balotelli on Wednesday.

The incident, witnessed by Italy coach Marcello Lippi as he considers whether Totti should make a comeback at the World Cup, was just one of a host of rash fouls in the tense match.

“It was a game with aggression and intensity. We always controlled the game and Roma lost their heads a bit,” Inter coach Jose Mourinho, whose future with the club remains uncertain, told Rai TV.

Inter just edged the first half with Maicon seeing a shot saved from a tight angle and Milito having an effort ruled out for offside, prompting Mourinho to rush to a television near the dugout to check the replay.

Minutes later the Argentine goal machine was properly on the scoresheet when he buried an superb angled shot.

Apart from a couple of penalty appeals, Roma’s best chance came in the second half when defender Juan somehow headed over after Totti’s shot had been parried.

Roma coach Claudio Ranieri surprised everyone in a pulsating Stadio Olimpico by leaving Totti on the bench while Mourinho was also playing his usual mind games.

The coach had said playmaker Wesley Sneijder was almost certainly not fit but the Dutchman took his place in Inter’s starting lineup only to limp off after five minutes with a thigh problem to be replaced by Balotelli.

Police were out in force given increased tensions following Inter’s controversial 2-0 league win at Lazio, whose supporters cheered the goals because they want bitter rivals Roma to miss out on the title.

Angry Roma fans honked horns and sang under Inter’s Rome hotel overnight to try to disturb preparations while Mourinho, who had slammed the idea of playing the final in Roma’s home stadium, had lasers shone in his face during the match. 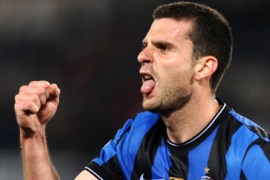 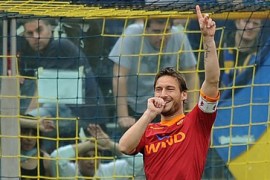 Totti puts Roma back on top

Title challengers beat Parma 2-1 ahead of Inter Milan’s match against Lazio the next day. 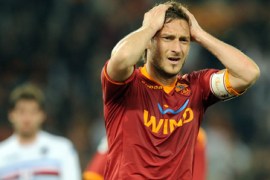 Roma lose for first time in 25 games to hand Inter the title initiative with 2-1 loss. 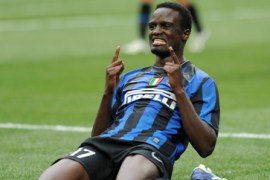 Mourinho rests players as champions go top with 3-1 win ahead of Roma’s match next day.