Unfashionable English Premier League side Fulham will take a one goal lead to Germany for the second-leg Europa League tie against Wolfsburg.

Fulham beat the reigning German champions 2-1 in the quarter-final clash at Craven Cottage on Thursday, but Roy Hodgson, the Fulham manager, will disappointed that his side gave Wolfsburg a last-minute lifeline.

Meanwhile, Liverpool surrendered a one-goal lead in Portugal to lose 2-1 to Benfica, Atletico Madrid and Valencia drew 2-2 in an all-Spanish affair while Hamburg, who will  host the final in May, edged Standard Liege 2-1.

Fulham were firmly in control of their tie after two goals in four minutes midway through the second half from Bobby Zamora and Damien Duff.

But they were unable to keep the visitors at bay and Alexander Madlung’s 89th minute header gave Wolfsburg a priceless away goal.

“I don’t know if we would be favourites even at 2-0 but at 2-1 you definitely relinquish any chance of being called favourites  because if they score and shut up shop they go through,” Hodgson said after the match.

“But they have to score and get a victory so if we get a goal we will have a good chance of going through ourselves.”

“I’m not going to allow a late goal to take the gloss off a win  and a good performance against the German champions, especially at this stage of such a long season.”

Lorenz-Gunther Kostner, the Wolfsburg coach, said: “At 2-0 you think what have you  done wrong but the team really pulled themselves together.

“We scored one goal too little but we still have a good chance at home. With the fans behind us it is still a very open game. But I wouldn’t say we are favourites. It is only half-time.”

But instead of building on their lead, Liverpool found themselves down to 10 men after Ryan Babbel was sent off for pushing Luisao, who had angered the Dutch winger with a foul on striker Fernando Torres.

Oscar Cardozo levelled with a 59th-minute penalty after Pablo Aimar went down under Emiliano Insua’s challenge. The Paraguayan striker then added his eighth goal of the tournament in the 79th minute when another penalty was awarded after Jamie Carragher handled the ball.

“We are really disappointed. We started really well, scored an early goal and we created some chances even with 10 men,” Lucas Leiva, a Liverpool defender, said.

“Now we have to keep going and try to go through in Anfield. The away goal always is important.”

Atletico Madrid coach Quique Sanchez Flores came away from a meeting with his former club Valencia with two possibly vital away goals.

Sanchez Flores, who spent most of his playing career at the Mestalla and was coach from 2005 until 2007, saw his side twice take the lead on through Diego Forlan and Antonio Lopez.

But Valencia, who are third in the Spanish first division and chasing a Champions League spot, hit back through Manuel Fernandes and David Villa.

“It would be wrong to think this is a good result because the series is still 50-50 in this moment,” Flores said.

In Germany, Hamburg beat Standard Liege 2-1 after coming back from a goal down.

Dieudonne Mbokani found the target on 31 minutes for Standard before Mladen Petric levelled from the penalty spot nine minutes later.

Dutch forward Ruud van Nistelrooy grabbed the winner on the stroke of half-time for Hamburg. 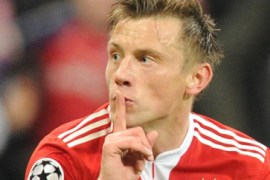 Wayne Rooney scores early away goal but Germans fight back to win 2-1 in ECL first leg. 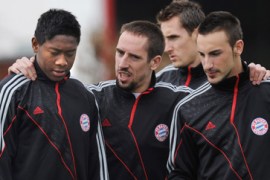 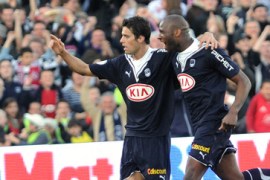 Race for titles in top European football leagues set to be one of closest in years.