It was a political gaffe for Chinese short track speedskater Zhou Yang – failing to thank her country and its government after her gold medal finish at the Vancouver Winter Olympics.

But the 18-year-old is winning widespread support for her honesty and naivety, after being criticised by a top sports official this week for mentioning her parents in a post-win interview rather than expressing gratitude for the Chinese sports system.

“How can somebody love their country if they don’t even love their parents?” China Youth Daily reporter Ma Jing wrote on Tuesday, echoing the many online comments supporting Zhou in a case that is one of the hottest topics on Chinese Internet sites.

After her 1,500 win on February 20, Zhou told China Central Television: “It’s my dream. After winning the gold I might change a
lot, become more confident and help my parents have a better life.”

She thanked her coach and teammates, but never mentioned the state-run sports system in which she had trained as an athlete for much of her life.

“It’s right to respect and thank your parents but you also have to have the country in your heart. The country must come first. Don’t just talk about your parents,” said Yu Zaiqing, deputy director of China’s General Administration of Sport, in widely reported comments earlier this week.

Yu, who is also an International Olympic Committee vice president, added that the sports system must step up “moral education” for athletes.

He’s been skewered in comments on countless websites, where many Chinese who are normally hesitant to voice opinions speak freely because of the anonymity found online.

His entry on Baidu Baike, a site similar to Wikipedia, was temporarily changed to say “Yu Zaiqing, male…no mother and no father, raised by the Communist Party.”

Zhou’s family has defended her, saying she is a young woman unfamiliar with the political demands facing Chinese athletes.

“Of course she’s naïve – if she’s not naive why would she say something like that?” said Zhou’s aunt, surnamed Wang, who refused to give her name as is common among media-shy Chinese.

“Of course her parents have sacrificed a lot too.”

Yu’s remarks underscore the ties binding sports to politics in China, where youngsters picked for their athletic abilities and specific physical traits undergo years of gruelling training, with the singular goal of “winning glory for the country.”

But Zhou appeared to be more concerned about her parents’ welfare than her country, a move that has struck a chord among Chinese whose deeply ingrained Confucian heritage highly values respect for elders.

“For a girl who has a humble wish to let her parents live a comfortable life, she was heroic in her struggle to win these two gold medals for China but then encountered such criticism,” wrote sports columnist Sa Fu of Chinese internet portal 163.com.

“This is the real humiliation for the country.”

Like many Chinese athletes, Zhou comes from a poor background.

While parents hope their children can win Olympic medals and therefore financial awards, there can be a long wait for the payoff.

Before her two golds in Vancouver, Zhou was helping to support her disabled parents with her 500 yuan ($73) a month stipend.

She can now expect more than $150,000 in prize money to go with the new two-bedroom apartment that’s already been awarded to her parents in their hometown of Changchun in northeast China.

On Tuesday, officials tried to deflect criticism of Yu, who made his comments Sunday during a sports committee meeting of China’s top legislative advisory body.

A fellow committee member said the group was discussing athletes in general and not Zhou specifically.

China’s General Administration of Sport did not respond to a faxed request for comment.

And Zhou appeared to have learned her lesson in Chinese political correctness.

Several websites on Tuesday carried comments attributed to the skater, in which she gave thanks to all the right people.

“And I thank everyone who supported us, I thank our coaches, I thank the staff, and I thank my mom and dad.” 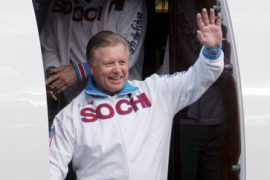 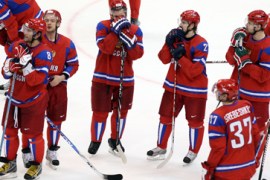 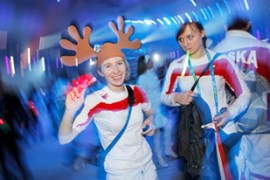 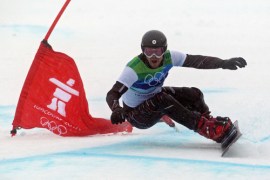