Manchester United went two points clear at the top of the English Premier League with a 1-0 win over Wolverhampton Wanderers.

Wolves’ Sam Vokes missed an open goal in injury time as the home side passed up the opportunity to ease their relegation fears and peg United back with Arsenal and Chelsea, who both have 61 points.

Arsenal had gained parity with their London rivals earlier as under-fire England winger Theo Walcott scored in a 3-1 home win over Burnley.

Walcott, given a starting place after being criticised for an inept display in an international against Egypt this week, looked to have scored the winner 15 minutes into the second half after David Nugent had equalised for Burnley after Cesc Fabregas’ opener.

But Andrei Arshavin made the points certain in injury time after coming on as a late substitute.

Arsenal’s victory puts them on 61 points – the same as Chelsea, who had opened up an 11-point gap over their London rivals when they beat them 3-0 at the Emirates Stadium in November.

The Gunners have played one game more than Chelsea, as have United, who endured a frustrating evening in the late match at Molineux on Saturday before Scholes fired home his 100th league goal with 18 minutes left.

And Vokes’ miss with the goal at his mercy two minutes into stoppage time provided the latest twist as the title race enters its most exciting climax in years.

“I think the form of the team has been good we’re managing to do without players from time to time,” United manager Alex Ferguson, who was forced to start without injured strikers Wayne Rooney and long-term casualty Michael Owen, told ESPN.

“That back four haven’t played together for a year and a half, so that shows you our strength in depth.”

Arsenal would have gone top if Nicklas Bendtner had shown any sort of finishing ability, the Dane missing a hatful of easy chances as they sought the four-goal victory that would have taken them above Chelsea on goal difference.

With Burnley managing just one draw and 13 defeats from their 14 previous Premier League away games this season, it was no surprise that Arsenal were on top from the start.

The onus was on Walcott to find a way through and show himself worthy of a place in England’s World Cup squad but though the winger had some early success against his full back he failed to provide much in the way of convertible crosses.

Instead it was the eye-of-a-needle passing of Fabregas and Samir Nasri that eventually opened the massed Lancashire ranks and enabled Fabregas to cleverly tuck in the opener after 34 minutes.

The mercurial Spanish midfielder limped off a few minutes later with what looked like a hamstring strain – not good for Arsenal ahead of Tuesday’s European Champions League game against Porto.

Arsenal paid for their profligacy when Nugent was given space to run through the middle and lift the ball over Manuel Almunia five minutes into the second half.

Walcott restored the lead 10 minutes later with a well-taken curler but while the fans sat back to await the goal rush that would take them top, the misses left them nervous before Arshavin finally killed it off in stoppage time.

With a kinder-looking run-in than either of their two rivals, Arsenal remain very much in the hunt for their first title success since 2004. 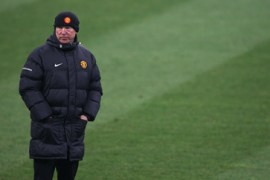 United could top the EPL this weekend despite Ferguson fears over Rooney fitness. 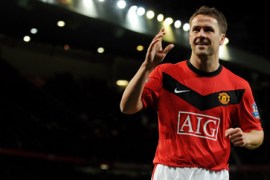 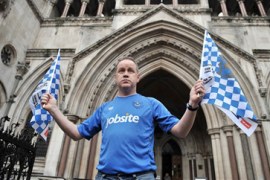 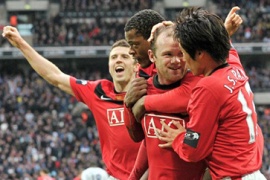