That’s an association that no one in motor racing’s elite class wants – and F1 chiefs will be praying that the Australian Grand Prix delivers the excitement that was absent in the season-opener in Bahrain.

In the Arabian Gulf two weeks ago, rule changes that were meant to make for more overtaking and more thrills appeared to leave cars in a procession from start to finish.

There had been dull races long before the new rules came in, and Bahrain winner Fernando Alonso said fans and the media should show patience – or go and watch another sport.

Changes, including a ban on refuelling, designed to inject excitement into the championship and discourage drivers from playing safe, fell flat at Sakhir.

The twice world champion Spaniard, who enjoyed a dream debut with new team Ferrari to lead a one-two with Brazilian teammate Felipe Massa, said the regulations must be given a chance.

“I think we need to be calm, we need to wait some races to see if the new rules have some impact in the show,” Alonso said at Albert Park circuit on Thursday.

“Last year, first seven races, Jenson (Button) won six or seven. It was boring? Maybe yes, maybe not, this is Formula One.

“Michael (Schumacher) won five championships consecutively, it was boring? Maybe yes, maybe no, this is Formula One.

“This is about technology, about how precise everything is in terms of driver, mechanics, engineering, everything.

“So people that want extra show, maybe they should reconsider whether they want to watch Formula One.”

Lewis Hamilton meanwhile believes the lessons from his “harsh struggle” last year will benefit him when he returns to the circuit where his championship defence unravelled in scandal in 2009.

The British driver was disqualified from last year’s season-opening Australian Grand Prix for misleading stewards at a hearing that promoted him to third place.

Hamilton, whose team were handed a suspended three-race ban, stuck with McLaren and eventually won twice among five podium finishes to come fifth in the championship.

The 25-year-old, who became Formula One’s youngest world champion in 2008, said he arrived at Melbourne this year a more complete driver and person ahead of Sunday’s race.

“Coming to the race now I think that every year you feel you make another step,” he said.

“Last year was a long, harsh struggle but we got back to the top and I was able to work on different sides of my driving.

“When you’re at the back you have more time to focus on other areas. Once I got to the front I felt I was stronger and I ended up on on high and I think I rolled with that into this year.”

Hamilton was pleased with his podium finish in Bahrain but said he and and world champion teammate Button would focus more on qualifying after not paying it enough heed in the season-opener where the race was effectively decided on grid positions.

“Our race pace is not too bad and our understanding of the car felt very good in the race,” he said.

“I think clearly the most important part for us is to get the qualifying sorted, understand how to get the most out of the car on that single lap.”

Australian fans won’t care much for the effects of the new rules or Hamilton’s qualifying performance.

They just want to see a home hero finish first.

After hobbling into last year’s Australian Grand Prix still recovering from a broken leg and shoulder, Mark Webber is happy to return to Albert Park circuit with bones intact and two race wins under his belt.

The Australian Red Bull driver, whose seven-year victory drought was banished at the German Grand Prix last year, also carries a huge weight of expectation from local fans desperate to end their long wait for a home winner.

Webber’s preparations for Melbourne’s season-opener last year were cut short by a horrific crash in an off-season adventure race in Tasmania.

He suited up with only 17 practice laps under his belt, but drove through the pain to qualify eighth, before a first corner crash after an entanglement with Rubens Barrichello stopped his victory bid within 10 seconds.

Webber, who described the moment as one of the most disappointing of his life, said his two victories, among eight podiums last year, had given him more composure to make amends.

“The more times you experience (winning), obviously you have more composure, more control about how you control the race yourself,” he said.

His hopes of winning at home are arguably at their highest, with fellow drivers gazing longingly at the Red Bull’s and describing them as surprisingly speedy.

Webber, who finished eighth after a qualifying mistake in the season-opener at Bahrain a fortnight ago, played down his car’s edge, however, and said the team was still striving for a perfect weekend.

Red Bull, who won the last three races of the 2009 season, could well have had four in a row, had Webber’s German teammate Sebastian Vettel not suffered a spark plug failure when leading at Sakhir.

“Pace is one thing but we need to execute clean weekends,” he said. 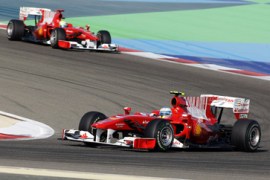 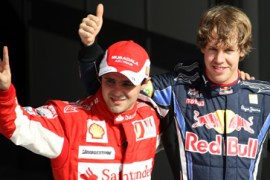 Massa back with a ‘bang bang bang’

Sebastian Vettel impressed as Brazilian qualifies one place beihind him in Bahrain. 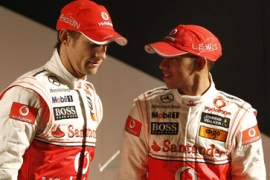 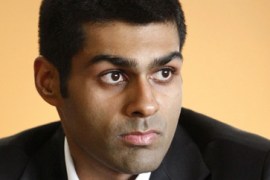 Chandhok: ‘India expects too much’

F1’s only Indian driver says he is having to damp down unrealistic hopes at home.