Portsmouth face almost certain relegation from the English Premier League after being docked nine points over their financial problems.

The debt-laden south-coast club are the first Premier League team to suffer a points penalty for entering administration.

They now have just 10 points and are 17 points adrift of the safety zone with just nine games remaining.

“Following the High Court’s decision that Portsmouth FC’s administration is valid the Premier League Board convened today to apply the League’s rules and policies in relation to a member club suffering an event of insolvency,” a League statement said on Wednesday.

“As a result Portsmouth FC has been deducted nine points with immediate effect.”

The nine-point deduction had been delayed while Portmsouth’s move into voluntary administration was formally validated – a situation resolved in the High Court on Tuesday when a winding up order against the club was suspended.

“As part of this process the Board met with the Administrator to agree how we will work together for the remainder of the season to ensure that the club is able fulfil its commitments,” the Premier League said.

Administrator Andrew Andronikou, who is trying to rescue the troubled club, met with the League Board on Wednesday.

Last week Portsmouth, which has debts of about 78 million pounds ($119.8 million) and has failed to pay players’ wages several times this season, axed 85 jobs.

Andronikou said on Tuesday he hoped Portsmouth could come out of administration in “six to eight weeks”.

Failure to do so by the end of the season could trigger a 10-point deduction in the Championship (second division) next season.

Portsmouth, beaten 4-1 at Liverpool in the league on Monday, have reached the FA Cup semi-finals where they will play Tottenham Hotspur or Fulham at Wembley Stadium in April. 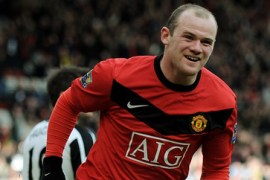 United go back to top of EPL after Berbatov caps double Rooney strike against Fulham. 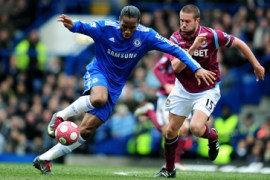 Drogba fires Blues back to the top 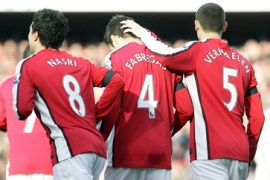 Arsenal pile on the pressure

The EPL title race hots up as the Gunners draw strength from their European success. 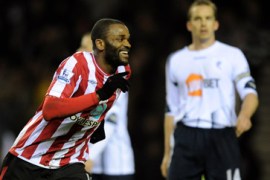