Lionel Messi produced yet another masterclass as Spanish and European champions Barcelona beat Stuttgart 4-0 to reach the quarter-finals of the Champions League.

The Germans had gone into the game with some hope after securing a 1-1 draw in their home leg two weeks earlier.

But Messi scored two either side of a Pedro Rodriguez strike before Bojan Krkic slotted home with his first touch in the last minute to give the Catalans a 5-1 aggregate win on Wednesday.

In the night’s other match, Bordeaux withheld an Olympiakos fightback to win 2-1, 3-1 on aggregate, and reach the last eight of Europe’s top competition for the first time since 1988.

Messi has been in irresistible form for Barcelona and with 13 minutes gone the little Argentine produced a goal that was both stunning and practically inevitable.

Receiving the ball from Yaya Toure in space by the half way line, he ran in from the right, nudged away a challenge and fired the ball into the top corner with four defenders standing round him.

Nine minutes later his chipped pass into the box allowed Toure to pick out Pedro Rodriguez on the edge of the six-yard box for 2-0 at the Nou Camp, 3-1 on aggregate.

And 15 minutes into the second half, Messi was there again to receive a flick from Dani Alves on the edge of the area.

Turning his marker, he played the easiest of shots past Jens Lehmann for 3-0 and his 27th goal in all competitions.

Krkic took a through ball from fellow substitute Zlatan Ibrahimovic to score with his first touch on 90 minutes.

In Bordeaux, Yoann Gourcuff put the Girondins ahead in the first five minutes but Kostas Mitroglou gave the Greeks a chance.

Marouane Chamakh popped up with the winner on 88 minutes to put Laurent Blanc’s French champions through. 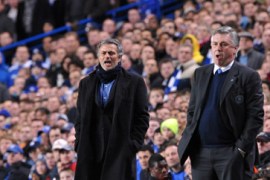 Portuguese returns to Chelsea and leads his Inter side to ECL quarters with single Eto’o goal. 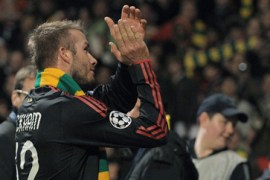 David Beckham dons the green and gold in an emotional return to Old Trafford. 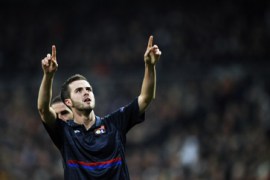 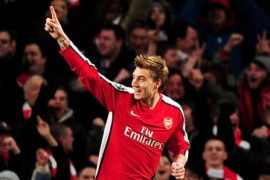 Arsenal through to Champs League quarters with 5-0 win as Bayern down Fiorentina.