Norway confirmed their dominance as a winter sports powerhouse when Aksel Lund Svindal and Marit Bjoergen both clinched gold medals at the Winter Games.

Svindal secured top spot in the Super-G discipline, and Bjoergen claimed her second gold of the Games by winning the 15-kilometre cross-country pursuit.

The results mean Norway become the first nation to rack up 100 gold medals in the history of the Winter Olympics.

The sport’s governing body rejected the appeal as it had done with a similar US complaint.

Canada did, however, get more than a consolation prize in the men’s race when Jon Montgomery upset frontrunner Martins Dukurs in his bid for Latvia’s first ever Winter Olympics gold.

Montgomery won by seven one hundreths of a second, less time than a human being takes to blink.

Svindal won the super-G at Whistler in 1 minute, 30.34 seconds, leaving American teammates Bode Miller and Andrew Weibrecht behind for silver and bronze.

It was Norway’s fourth gold medal in seven races since the discipline was added to the Olympic program at the 1988 Calgary Games.

“It’s been a lot of work getting to where I need to be for winning races,” said the 27-year-old Svindal, who took silver behind Didier Defago of Switzerland in the downhill race and is peaking at the right time after a difficult season trying to defend his overall World Cup title.

Austria didn’t get anyone into the top 10 and Switzerland’s best placing was Carlo Janka in eighth. Swedish veteran Patrik Jaerbyn crashed and had a mild concussion.

The 32-year-old Miller was 0.28 seconds behind Svindal for silver, his fourth Olympic medal making him the most decorated American Alpine skier in history. He has yet to win a gold.

Bjoergen became the first double gold medallist of the games soon after with victory in the cross-country pursuit.

The four-time world champion is still coming to terms with multiple trips to the top of the podium after settling for silver medals at her previous two Olympics.

“I knew that I was in great shape, but to take two golds, I never dreamed about it,” said Bjoergen, who won the individual classical sprint on Wednesday and bronze in the 10-kilometre race on Monday.

“It still hasn’t dawned on me.”

In contrast, Britain’s medal is their first individual gold medal at a Winter Games in 30 years, the last one earned in 1980 by skater Robin Cousins.

Wearing a helmet that provoked protests that will be considered by the international federation, Williams finished four runs at the Whistler Sliding Centre in 3 minutes, 35.64 seconds, with Germans Kerstin Szymkowiak and Anja Huber finishing second and third.

The 27-year-old Williams whizzed face down and head first inches above the ice at 89 miles per hour – nearly 20 mph faster than the speed limit on a British motorway – smashing the women’s course record at the Whistler Sliding Centre.

“It’s amazing. I feel like I am in a little bubble,” said Williams.

Normal hill gold medallist Simon Ammann pre-qualified for Saturday’s final, when he’ll be able to wear the ski bindings that sparked a protest from the Austrian delegation. The International Ski Federation rejected the Austrian claim that the bindings gave Ammann an aerodynamic advantage.

Russia, among the medal favourites in Vancouver, languished with one gold on Day 8, much to the astonishment of 2006 figure skating champion Evgeni Plushenko and even Prime Minister Vladimir Putin.

Plushenko was unhappy with his silver on Thursday night, saying the gold medal awarded to American skater Evan Lysacek “raises questions” about the judging.

Plushenko, who is only a few months into a comeback from retirement, landed a quadruple jump whereas Lysacek did not attempt a quad.

Putin reportedly sent a message to Plushenko saying the “superb performance” was worthy of a gold medal.

But Lysacek remained confident that his program was strong enough that he didn’t need a quad to beat Plushenko, who led after the short program.

The United States remains at the top of the Games’ gold tally with six medals to Norway’s five, while Germany and Canada follow with four. 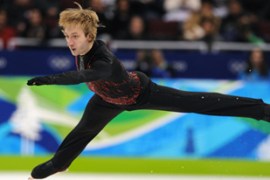 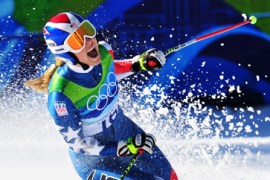 Vonn savours breakthrough gold as a trio of stars shine on a golden day for the US. 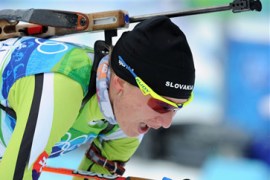