Everton secured a rare win over Manchester United with two late goals preventing the champions from going to the top of the English Premier League.

Substitutes Dan Gosling and Jack Rodwell at gave Everton a 3-1 win over United at Goodison Park in what manager David Moyes called a “brilliant victory”.

The result opened up a four-point lead for league leaders Chelsea after Didier Drogba’s double inspired a 2-0 win at Wolves.

The in-form Drogba, who has six goals in five games since returning from the Africa Cup of Nations, ensured the Blues were able to take advantage of United’s slip.

Third placed Arsenal moved just two points behind United after a 2-0 win against Sunderland at the Emirates Stadium.

Everton have now lost only one of their last 12 league matches and are climbing the table, with Moyes not ruling out a top-four finish.

“We can start to look up rather than down as our form over the last month or so has been very good,” he said.

Everton had won only one of their previous 29 league games against United and lost 13 of the last 17 at Goodison to them.

It looked like United had control when Dimitar Berbatov put his team ahead with a powerful shot that went in off the underside of the bar after 16 minutes.

Everton, missing injured midfielders Marouane Fellaini and Tim Cahill, fired back the equaliser two minutes later through striker Diniyar Bilyaletdinov, who was first to react from a clearance by Jonny Evans and lashed a left-foot belter away from Edwin van der Sar into the net.

Moyes’ two late substitutions changed the course of the game. Gosling replaced Bilyaletdinov after 71 minutes and put Everton 2-1 up five minutes later with a shot from close range from Steven Pienaar’s cross.

Rodwell, 18, who replaced Pienaar after 88 minutes, scored Everton’s third two minutes later after a surging run that took him into the United area where he fired wide of Van der Sar to seal Everton’s first win over United since 2005.

United manager Alex Ferguson said the defeat was a blow at this stage of the title race, a huge disappointment following their 3-2 win over AC Milan in the Champions League on Tuesday.

“We were well beaten. We were outplayed in the second half. We are going for the championship and you don’t expect Manchester United to look tired like that.

“It was a bad result for us at this time of year. You can’t afford results like we’ve had today. Obviously we hope others drop points and the way the league is going this season that’s the way it has been.”

At Molineux, Chelsea looked shaky at the start took the lead in the 40th minute.

Yuri Zhirkov exchanged passes with Michael Ballack and the Russian crossed for Drogba to slot home.

Drogba took his goal total for the season to 25 in the 67th minute when poor defending from Christophe Berra allowed him to reach Petr Cech’s long punt, round goalkeeper Marcus Hahnemann and drive in his 25th goal of the season.

Arsene Wenger’s team made the breakthrough in the 27th minute when Denmark striker Nicklas Bendtner tapped-in Emmanuel Eboue’s cross for his first goal since October.

Sunderland have now gone 11 league matches without a win and Arsenal goalkeeper Manuel Almunia, back in for Lukasz Fabianski after the Pole’s midweek blunders against Porto, was rarely tested following Bendtner’s strike.

Gunners captain Cesc Fabregas stroked home a 90th minute penalty after the Spaniard was bundled over by Fraizer Campbell.

West Ham pulled away from the relegation zone and left Hull City perilously close to it following their 3-0 win at Upton Park where Hull had Craig Fagan sent off. Valon Behrami, Carlton Cole and Julien Faubert scored for the Hammers.

Stoke beat Portsmouth 2-1 in the late game at Fratton Park when a stoppage time goal from Stoke’s Salif Diao only added to Pompey’s continuing relegation worries. 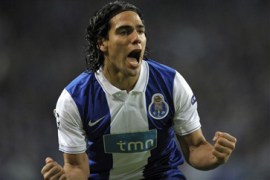 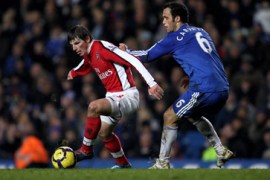 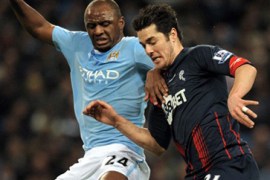 City close in on top four

Manchester City beat Bolton 2-0 to move up to fifth in the English Premier League. 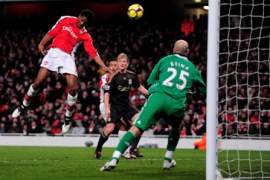 Diaby puts Gunners back on track