Georgian luge competitor Nodar Kumaritashvili was given emergency resuscitation treatment after a horrifying crash in training for the Vancouver Winter Olympics.

His sled left the track at the Whistler Sliding Centre at around 90mph, according to observers, and smashed into a course side structure.

Medics rushed to the scene to give him treatment.

It was a sickening culmination to what has been a stromy start as Vancouver prepared to welcome the world to the Winter Olympics – with excitement over who would light the cauldron at the opening ceremony tempered by fog and rain and concerns over Alpine skier Lindsey Vonn’s bruised shin.

Friday started in mild conditions in downtown Vancouver but with problems at Whistler Mountain, where fog wreaked havoc with Alpine skiing training.

At least organisers can be confident that weather will not be a factor at the opening ceremony, which is the first at a Winter Olympics to be held indoors.

The BC Place arena in Vancouver will be sold out and hundreds of millions of viewers will tune in to see the cauldron brought to life by the final, as yet unidentified, torch-bearer.

Speculation has been rife that Wayne Gretzky would be the man to take that honour after the former ice hockey great was spotted in the city this week.

Organisers have remained tight-lipped on the subject, however, and have forbidden those who attended a dress rehearsal from revealing anything in a bid to preserve the wow factor.

The ceremony will mark the official opening of Games that will run until February 28 in the prosperous city on Canada’s Pacific Coast.

Whether Vonn, one of the most popular and recognisable faces among the athletes, is able to compete remains to be seen.

The American arrived worried that a bruised shin might stop her going for five gold medals in Alpine skiing and while she used Twitter and Facebook to reassure fans that she was getting better, the cancellation of her training run on Thursday meant she was unable to get a real test.

“With Glowing Hearts”, read the front page headline in the Vancouver Sun on Friday, yet not everyone in the city is delighted to see the five-ring circus in town.

Anti-Olympic groups plan a series of protests and predict one of the largest sporting events in the world will draw anti-globalisation activists from across North America.

Up to 1,400 people are expected to protest during the Games according to Bud Mercer, head of Olympic security.

Many visitors to the city have also detected some Games ambivalence among residents, with newspapers running articles for days encouraging their readers to stop griping about traffic problems and money and get into the Olympic spirit.

A poll, results of which were reported in the Vancouver Sun on Friday, found 60 per cent of respondents agreeing with the statement that the Games were a waste of money, although a big majority also said Canadian athletes made them proud.

Notoriously, in the other two Olympics Canada has hosted, summer in Montreal in 1976 and winter in Calgary in 1988, the country failed to win a single gold.

When – for it is surely a question of when and not if – the first Canadian athlete breaks that jinx it is hard to imagine the country not rejoicing.

Whether the sport itself takes place on schedule will depend largely on the weather in Whistler and Cypress Mountain, where fog and rain are causing problems.

The men’s downhill training session set for Friday morning was cancelled due to fog and the women’s had to be postponed for two hours. 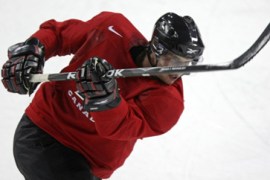 There’s only one gold that really matters at the Vancouver 2010 Winter Olympics. 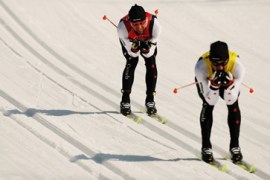