Afghanistan beat the United States to top their group and join Ireland, the Netherlands and the United Arab Emirates in the last four of the ICC World Twenty20 qualifiers.

In the final group games Afghanistan defeated the United States by 29 runs in Dubai, their third win in a row, while hosts UAE romped to a 42-run win over a hapless Canada in Abu Dhabi.

In the day’s other matches joint title holders Ireland defeated Scotland by 37 runs in Dubai while the Netherlands routed Kenya by seven wickets in Abu Dhabi.

Thursday’s results put Afghanistan, mainly made up of Afghans brought up in refugee camps over the Pakistan border, on top of Group A, allowing them to carry forward two points into the Super Four stage which will be played in Dubai on Friday and Saturday.

As top of the other group, the UAE also take two bonus points into the final round while top seed Ireland and second-seed the Netherlands, both expecting to be the two teams to progress to the World finals in the West Indies which run from April 30-May 16, will start the final stage on zero points.

Against the US, Afghan bowlers put up a disciplined performance which was backed up by some smart fielding that allowed the Asian side to defend a 136-run target as the Americans finished at 106-7.

The UAE, which had qualified for the Super Four stage on Wednesday, maintained their unbeaten run by defeating Canada by 42 runs after batting first and setting a 142-7 target.

Canada were never in the hunt and kept losing wickets at regular intervals before being bowled out for 100 in 15.5 overs.

Ireland managed only 10 fours and a six in their 136-7 but their bowlers, including former captain Trent Johnston (3-20) bowled Scotland out for 99.

The Dutch bounced back after Wednesday’s shock loss to the UAE with a seven-wicket win over Kenya. 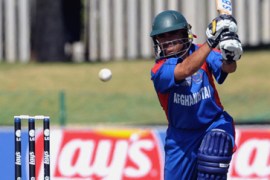 US ‘underdogs’ in Afghan clash