Chelsea ended their dire run with a 1-0 home win over Bolton Wanderers but Arsenal missed the chance to go joint-top after conceding a late equaliser in a 2-2 draw at 10-man Wigan Athletic.

It was a miserable night for Liverpool as they were booed off after being outplayed and outfought by Wolverhampton Wanderers, who moved up from the bottom of the standings after beating the Reds for the first time in 27 years thanks to a goal by Stephen Ward.

Arsenal’s draw took them to 36 points, two behind Manchester City and Manchester United, who lead the English Premier League on goal difference. Chelsea move back to fourth place on 34, one ahead of Tottenham Hotspur, with Bolton sixth on 29.

Having been beaten by Arsenal on Monday to make it just six points from 24, Chelsea were desperate to give their fans something to shout about.

However, there was little sign of last-season’s double-winning pedigree in the first hour as Bolton, who would have leapfrogged the Londoners with a win, worked tirelessly.

Neither side had managed a shot on target – though Didier Drogba did hit a post – until Chelsea finally found some energy after 61 minutes when Drogba charged down the right and crossed for Florent Malouda to sidefoot in.

Bolton had several decent chances to equalise but Chelsea nervously held on to record their first league victory since November 10.

“The first half was very difficult, we didn’t play so well and there was a lot of weight on our shoulders,” said Chelsea boss Carlo Ancelotti.

“In the second half we were much better and played with more confidence, and after two games in two days we must say that the players did very well.”

A wet Wednesday in Wigan became harsh reality for Arsenal as, two days after outplaying the champions, they made eight changes and paid the price against a team who came back from 2-0 down to beat them 3-2 last season.

A Ben Watson penalty after 17 minutes had Wigan ahead but Andrei Arshavin equalised after 39 with an acrobatic volley and Nicklas Bendtner forced his way through to put them ahead just before half time.

Wigan’s hopes seemed to have disappeared when Charles N’Zogbia was sent off for butting Jack Wilshere after 78 minutes but three minutes later they were level after Sebastien Squillaci headed into his own net.

Wolves belied their position at the bottom of the league by taking the game to Liverpool at Anfield where Steven Gerrard made his first appearance for six weeks after a hamstring injury.

Wolves had managed only one point on the road all season but fully deserved their win, earned by Ward’s neat finish after 56 minutes.

Worryingly for an increasingly frustrated Liverpool manager Roy Hodgson, it was also their first clean sheet.

The Englishman’s position at Anfield will now come under more scrutiny after their recovery from a bad start to the season stalled in recent matches. 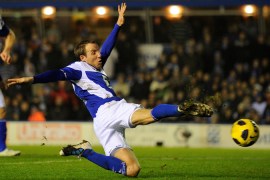 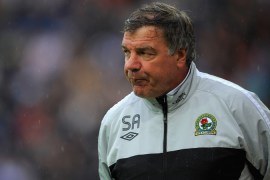 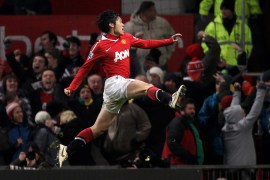 Park wins it for United