England wrapped up a crushing innings and 157-run victory over Australia in the fourth Test to retain the Ashes at the Melbourne Cricket Ground.

It has been 24 years since England last won the Ashes Down Under when Mike Gatting’s team claimed the series 2-1.

Australia’s humiliation was complete when Ben Hilfenhaus was the last man out before lunch on Wednesday, the fourth morning, caught behind off Tim Bresnan for a duck after Ryan Harris was unable to bat because of an ankle injury.

“Winning the Ashes in Australia has always been a bit of a Holy Grail for English sides,” skipper Andrew Strauss said.

“We haven’t won the Ashes yet but we obviously retain the urn which has been one of our primary goals and the guys deserve everything they get because the players stood up and performed when it mattered.”

Having won the Ashes at home in 2009, England keep the trophy after going 2-1 up with one Test remaining.

There was only going to be one outcome after Australia were routed for a miserable ground record low of 98 on Sunday’s opening day after Strauss had won the toss and put the Australians into bat on a greenish wicket.

The English responded with a towering 513 to hold a match-winning 415-run innings lead which Australia found totally beyond them.

Man of the match

Wicketkeeper Brad Haddin was left unbeaten with a defiant 55 including four fours and a six in Australia’s second innings of 258 for nine.

Bresnan finished as England’s best bowler with 4-50 off 21.4 overs, while England number three Jonathan Trott was named man-of-the-match for his unbeaten 168.

“The really important thing we need to do is pay credit to England and the way they played for the whole tour,” Australian skipper Ricky Ponting said.

“Apart from the third Perth Test, they’ve played a really high level of cricket the whole way through, not only this series, but the tour games as well. Credit to them for the way they prepared.”

In 1986 England won the series and the Ashes after their innings and 14-run victory at the MCG.

Australia can still level the series if they can fight back and win next week’s fifth Sydney Test, but the Ashes are gone.

“Our objective was to come out here and win the series, so we haven’t achieved that yet,” Strauss said.

“It’s very reassuring to know that the Ashes are going to remain in England for the next couple of years, but it would leave a very sour taste in the mouth if we weren’t able to go on and convert our position into a series win in Sydney.”

England last won at the MCG in 1998 with Dean Headley taking 6-60 in the second innings as the tourists won by just 12 nail-biting runs.

The heavy defeat was only Australia’s second in their last 12 MCG Tests, the previous coming two years ago against South Africa by nine wickets.

A small crowd, dominated by the celebrating Barmy Army and other English supporters, witnessed the final rites, with the Australian fans giving up on a lost cause.

Australia lost Mitchell Johnson in the second over of the final day, bowled by Chris Tremlett for six.

Haddin and Peter Siddle stalled England’s victory push with some lusty hitting in a 86-run partnership with both clubbing sixes off spinner Graeme Swann.

Siddle finally fell for his Test best 40 when he hoisted Swann to Kevin Pietersen on the long on boundary.

Hilfenhaus only lasted four balls before the axe finally fell on Australia.

Australia’s loss – the sixth biggest behind England’s innings and 579 run win at The Oval in 1938 – will heap further pressure on Ponting.

It was Ponting’s third loss of an Ashes series following his earlier defeats in England in 2005 and last year.

“The fact that I’ve lost those three Test series is disappointing for me,” he said.

“Hopefully, I am not only remembered as the guy that lost those three Ashes series, there’s lot of other great things I’ve been part of in my career.”

Given the lack of experience in the scarred Australian team, Ponting is expected to hold on to the captaincy for next week’s Sydney Test, fitness permitting with his fractured little finger.

Australia’s next Test after Sydney is not due until August against Sri Lanka. 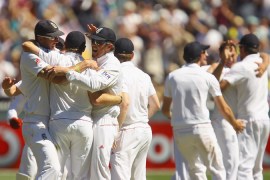 England on brink of Ashes glory

England pushed on for victory after setting Australia a herculean task of rubbing out a 415-run innings deficit. 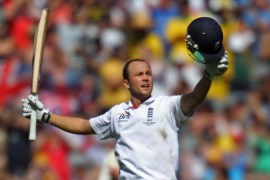 England take the wind out of Australia’s sails with a 346 run lead in the first innings. 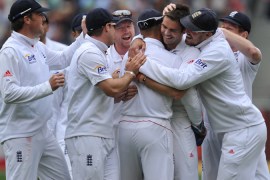 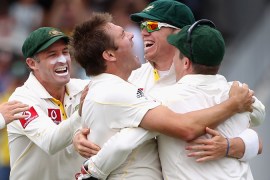 Johnson’s bowling magic cast a spell on England batsmen as they slumped to a 267-run defeat in the third Ashes test.