Goran Pandev opened the scoring in the first half of the match on Sunday. Moments later, Cameroon forward Samuel Eto’o doubled for the Italians.

Substitute Jonathan Biabiany made a late strike in the match.

The victory gives Italian team its fourth trophy for 2010. It is Inter Milan third world title – the team won the former Intercontinental Cup in 1964 and 1965.

A little earlier in the day, the Brazilian side Internacional claimed third place, over their South Korean rivals Seongnam.

The South Koreans finished with 10 men, and Internacional won the match 4-2.

In the English Premier League, match after match had to be cancelled because of heavy snow on the weekend.

Only two of the six premier league matches went ahead on Saturday.

Arsenal was hoping a match against Stoke City in North London would be the occasion to close the gap on League leaders Manchester United.

That match was called off, as was a match between United and Chelsea set for Sunday.

Blackburn drew 1-1 with bottom of the table West Ham. Junior Stanislas came in with a late equaliser for West Ham.

Earlier Sunderland beat Bolton one nil thanks to Danny Welbeck. Sunderland move up one spot to sixth place, while Bolton drop down to seventh for now.

In the Spanish Primeria division, Barcelona swept to a 5-1 victory away to city rivals Espanyol on Saturday, securing their place at the top of La Liga heading into the New Year.

Pedro opened the scoring after 19 minutes and made it 3-0 early in the second half after Xavi had netted Barca’s second.

Espanyol’s Pablo Osvaldo had briefly threatened something of a comeback making it 3-1 in the 63rd, when he became the first player to beat Victor Valdes in seven games, but Villa snuffed out their challenge with two breakaway goals towards the end.

The champions have now won 10 games in a row in all competitions and have 43 points from 16 games in La Liga.

They opened up a five-point gap over second-placed Real Madrid, who do not play until Sunday when Sevilla visit the Bernabeu.

Santiago Gonzalez started off with an impressive goal in the 11th minute, putting Villareal one up.

Then Jonathan Guzman came in with an equaliser for Real Mallorca, tying it up at one all.

Jonathan De Guzman pulled Mallorca even in the 28th. The Canadian forward struck a right-footed volley from a cross by Pierre Webo that left Villarreal goalkeeper Diego Lopez flat-footed as it dipped over his head and into the goal.

Rossi put Villarreal back ahead in the 35th from the penalty spot for his ninth goal of the season after Webo was called for handling in the area, and Nilmar sealed the win six minutes into the second half for his 10th goal. 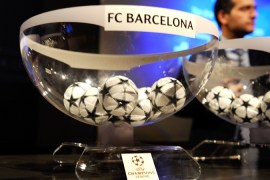 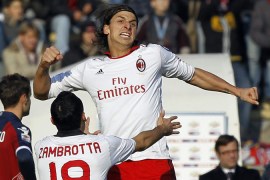 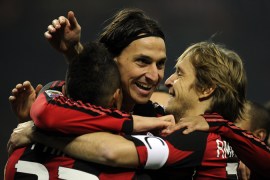