The left-handed opener followed up Wednesday’s unbeaten 138 with an attacking 126 not out, his ninth century in ODIs, in the third of the five-match series at the Reliance Stadium in Vadodara.

Virat Kohli, who scored 63, swiped the winning runs with a massive six as India reached their winning target of 225 with more than 10 overs to spare on Saturday.

Gambhir, named captain after the Indian selectors decided to rest senior players including regular skipper Mahendra Singh Dhoni, stitched together a quick-fire 115-run opening partnership with Murali Vijay’s 30 to set the tone for an easy chase.

Vijay was run out while trying to steal a quick single, New Zealand captain Daniel Vettori’s direct hit finding him way short of his crease.

Earlier, Gambhir won the toss and asked the visitors to bat first to allow his pacemen the opportunity to use the moisture on offer owing to an early morning start.

Left-arm seamer Zaheer Khan, making a comeback after recovering from a groin injury, struck early to pick up the prized scalps of Brendon McCullum and Ross Taylor.

The visitors never recovered from those early blows as off-spinners Ravichandran Ashwin and Yusuf Pathan made regular breakthroughs to pick up two wickets apiece.

A 94-run eighth wicket partnership between all-rounder James Franklin (72 not out) and tailender Nathan McCullum (43) gave the New Zealand total some respectability after they were reduced to 106-7 at one stage.

The last two ODIs will be played at Bangalore and Chennai on Tuesday and Friday. 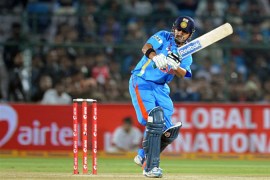 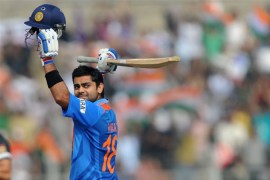