Manchester City put their domestic woes aside on a snowy Eastlands evening as a Mario Balotelli double contributed to a resounding 3-0 defeat of FC Salzburg, booking them a spot in the knockout round of the Europa League on Wednesday.

It was not such good news for Italian teams Juventus and Sampdoria, who were both knocked out and holders Atletico Madrid were staring at an early exit after a 3-2 home defeat by Greek side Aris.

Juventus were held to a 1-1 draw by Polish champions Lech Poznan in Group A, their fifth in as many matches, in freezing weather which made a snow-covered pitch almost unplayable.

Second-placed Lech are three points ahead of Juventus and have a better head-to-head record on away goals after their 3-3 draw in the reverse fixture.

Roberto Mancini’s side have slipped steadily down the English Premier League standings in recent weeks and they came into this penultimate round in Europe’s second-tier competition looking to perform after a disappointing 1-1 draw with Stoke last weekend.

Salzburg had yet to win any of their four Group A matches, and the Austrians ultimately failed to improve those statistics in a match which looked decidedly one-sided.

Balotelli, a summer signing from Inter Milan, opened the scoring in the 18th minute, doubling his tally just after the hour mark to take his goals tally to five in what has been an injury-delayed campaign for City.

England winger Adam Johnson made it 3-0 for the hosts in the 78th minute.

Zenit St. Petersburg made it five wins out of five in Group G with a 3-1 home success over Anderlecht and AEK Athens are in a good position to join them after beating Hajduk Split by the same score on a pitch resembling a quagmire.

Atletico, beaten by Aris 1-0 in their first match, are level on points with the Greek side in Group B but behind on head-to-head, meaning that progress into the knockout stage is no longer in their own hands.

Atletico are now at the mercy of eliminated Norwegians Rosenborg, who must do them a favour away to Aris if the holders are to progress with a result against group winners Bayer Leverkusen. The 1988 Uefa Cup winners clinched the group with a 1-0 win at Rosenborg.

Sergio Koke fired Aris into a second-minute lead but Atletico looked set to seal a berth in the last 32 after Diego Forlan and Sergio Aguero struck shortly afterwards.

Koke drew level with a penalty soon after the break before Nikos Lazaridis silenced the Vicente Calderon faithful in the 81st minute.

Italy striker Giampaolo Pazini fired Sampdoria ahead against PSV Eindhoven on the stroke of half time but the Dutch side stormed back thanks to a brace from Swede Ola Toivonen to stay top of Group I on 13 points.

They were joined in the last 32 by Ukraine’s surprise packages Metalist Kharkiv, who sealed their berth with a 2-1 home win over Hungary’s Debreceni.

Swiss campaigners Young Boys Berne celebrated an impressive 4-2 win over Vfb Stuttgart thanks to a late double from Zambian forward Emmanuel Mayuke, with both sides through from Group H. 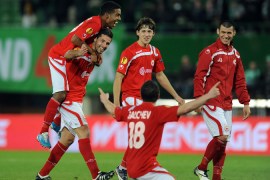 CSKA Moscow and Zenit St Petersburg go through to the next round of the Europa league, while Manchester City slip up. 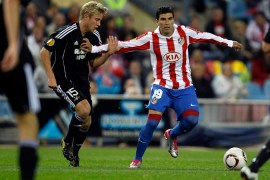 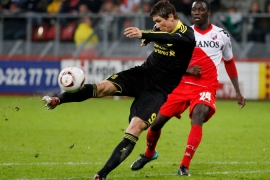