Virender Sehwag and Rahul Dravid have tormented New Zealand’s bowlers with contrasting centuries to give India a flying start in the first Test match in the western Indian city of Ahmedabad.

At close on Thursday, the hosts were at 329 for three after Sehwag (173) and Dravid (104) combined in a 237-run partnership for the second wicket to build a solid platform for India.

New Zealand had some consolation in the last session of the day when they picked up the wickets of Sehwag and Dravid.

With Sachin Tendulkar (13 not out) and V Laxman (seven not out) at the crease and Suresh Raina and Mahendra Singh Dhoni, the team captain, to follow, India will aim to drive home the advantage of batting first on a pitch already offering turn and inconsistent bounce.

Sehwag treated the New Zealand bowlers with disdain en route to his 22nd test century, his knock consisting of 24 boundaries and a huge six.

The right-hander danced down the track twice in the 1990s to hoist New Zealand captain Daniel Vettori over the in-field to bring up his century.

The left-arm spinner ultimately had his revenge when he bowled Sehwag, with the ball ricocheting off his pads on to the stumps.

“If we want to stay at number one … If we want to win more test matches, we have to give time to our bowlers to take 20 wickets,” Sehwag told Neo Cricket channel.

“The new ball was coming onto the bat, that’s why I played a couple of shots. But afterwards the ball was stopping.”

Dravid was a touch slow to start with but picked up his strike-rate later in his innings. He fell to the second new ball, chopping Chris Martin on to his stumps after scoring his 30th test century.

New Zealand players compounded their miserable day by dropping both Sehwag and Dravid.

Patel had an ordinary day with the ball too as the Indians seemed to take a particular liking to his off spin, conceding 61 off the nine overs he bowled before tea.

Sehwag said he had to work hard to switch off at times during his innings.

“When I am off strike, I try singing songs, talk to the umpires and not think about the game,” he said.

“I try to enjoy my cricket. The moment I start thinking, negative thoughts come on to my mind.”

Earlier, Dhoni had no hesitation in opting to bat first after winning the toss for the first time in nine tests.

India’s only casualty in the morning session was Gautam Gambhir for 21, when the left-hander played on to part-time medium pacer Ryder attempting an expansive cover drive.

The second Test is in Hyderabad and the third in Nagpur. 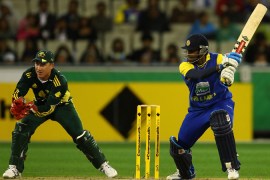 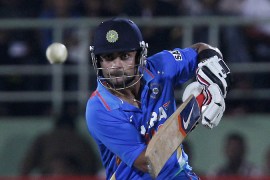 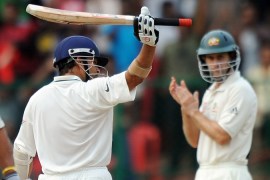 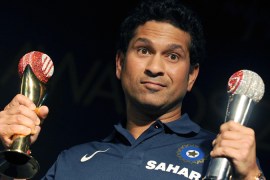