Players in Italy’s top football league are poised to go on strike over a dispute over contracts.

Union vice president Leonardo Grosso announced the Serie A matches on December 11 and 12 are likely to be affected after union officials walked out on talks with the Italian league over a new collective bargaining agreement.

A strike originally announced for September was postponed to allow more talks but the players and Serie A have failed to reach a deal ahead of the union’s November 30 deadline.

“The strike has been called for December 11 and 12. We are very sad because there was a willingness to find an agreement,” Grosso said, adding that the union would soon issue a statement confirming the strike.

The union had been attending last-ditch talks with Serie A and the Italian football federation in Rome over the league’s demands that unwanted players train away from the first team squads and accept a transfer away even when under contract.

The players’ association has refused to agree to the proposals while discussing a new collective contract which lays down footballers’ basic rights.

The federation had hoped the union would wait for an Olympic Committee arbitration hearing on Wednesday before naming strike dates.

Serie A president Maurizio Beretta, who still hopes for some sort of deal before two weekend’s time, was aghast.

“Today’s meeting was incredible, without precedence in history,” he said.

“The union refused to listen to the intervention of the federation president, which included the issue of players outside the squad. At that point they got up from the table and left.”

“The decision to strike is irresponsible and without reason,” Beretta said.

“I am dumbfounded by the AIC’s decision to leave the negotiating table while President Abete was showing the draft proposal prepared by the Football Association. It is a day without precedent.” 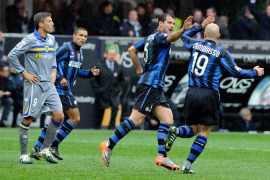 Dejan Stankovic scored a hat-trick at a chilly San Siro as Inter climb to fifth in Italy’s Serie A. 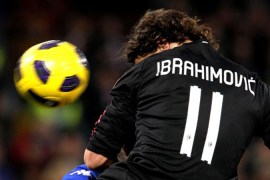 AC Milan miss the chance to go six points clear at the top of Serie A after being held to a 1-1 draw at Sampdoria. 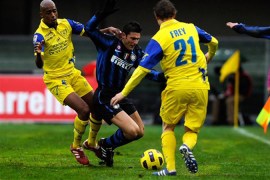