Virat Kohli struck a confident century to help India secure a 40-run victory over New Zealand in the first ODI on Sunday in Guwahati.

Kohli hit a 104-ball 105, his second successive and fourth overall ODI century, to guide India to 276 in the first of a five-match series.

Part-timer Yuvraj Singh (three for 43), his lanky spin colleague Ravichandran Ashwin (three for 50) and paceman Shanthakumaran Sreesanth (three for 30) then shared nine wickets as New Zealand folded for 236 in 45.2 overs.

Kohli was in fine form for India. He rotated the strike well and smashed some fine fours when the batting powerplay was taken in the 40th over. He was earlier involved in an 88-run stand for the third wicket with left-hander Yuvraj Singh.

Kohli’s was a soft dismissal as he failed to keep down a slower delivery from McKay and Jamie How, fielding in the covers, took his third of four catches.

Singh struck seven fours in his 42 but was unable to work the ball around.

He was caught behind off Tuffey, unable to capitalise on the cautious beginning that saw him score his first five runs off 23 deliveries.

India started well, but lost both openers relatively cheaply. Murali Vijay tried to pull Tuffey but only managed a top-edge for wicketkeeper Gareth Hopkins to take a high catch after the batsman had scored 29 off 32.

Gambhir played a casual shot off a delivery from McKay to give How an easy catch at point. Gambhir, leading the side after the selectors decided to rest several frontline players, made a run-a-ball 38.

India lost wickets at regular intervals in the face of some tight bowling and also slumped badly in the final stages to be dismissed in 49 overs.

New Zealand had a good start, but some precise bowling by Munaf Patel and R. Ashwin stopped the run flow and added pressure on the batsmen.

New Zealand could not manage a boundary for nearly 12 overs starting from the 11th before captain Ross Taylor struck two consecutive sixes toward the square-leg boundary off Yusuf Pathan.

Taylor’s 66 off 69 balls, in which he smashed three sixes and three fours, held together the middle-order but part-timer Yuvraj Singh came on to strike three crucial blows.

The left-arm spinner followed up on his useful knock earlier in the day by removing Kane Williamson, Scott Styris and Tuffey in the space of 23 runs, but Nathan McCullum and Mills prolonged the innings before both were dismissed by seamer Shantakumaran Sreesanth. 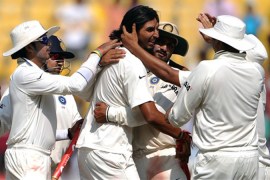