Mike Hussey and Brad Haddin combined in a record stand to give Australia command of the opening Ashes Test at the end of the third day at the Gabba in Brisbane on Saturday.

Hussey and Haddin both recorded centuries as their 307-run sixth-wicket partnership lifted Australia to a total of 481 all out and a first innings lead of 221 runs.

Openers Andrew Strauss and Alastair Cook survived a tricky session before stumps to cut England’s deficit to 202 runs after the tourists reached 19-0 in their second innings.

“The Ashes is what you dream of playing as a kid so to just be a part of the Ashes series is fantastic, but to score a hundred in the first Test, it’s a dream come true,” said Hussey, who hit 26 fours and one six in his eight-hour innings.

Hussey and Haddin, who came together on Friday with Australia wobbling at 143 for five, weathered England’s new ball onslaught in the morning before tearing off the shackles as the tourists toiled in the afternoon heat.

“I think the first hour and a half was probably the hardest Test bowling I’ve ever had to face with (Stuart) Broad and (James) Anderson bowling,” said Haddin.

The partnership was the highest in a Test match at the Gabba, beating Don Bradman and Lindsay Hassett’s 276 for Australia in the 1946-47 Ashes series.

Haddin, who had resumed on 25, stifled his attacking instincts but still scored more freely than his partner to drive Australia past England’s first innings tally of 260.

Hussey, whose place in the team was under threat before the series, then sparked wild celebrations from another packed house at the Gabba when he brought up his 12th Test century.

Back in Test cricket after missing much of the year through injury, Haddin reached his century in some style after lunch by clubbing a six over spin bowler Graeme Swann’s head to long-on.

Haddin was the first to fall, caught by Paul Collingwood off the bowling of Swann and Hussey followed three overs later when he miscued a pull shot to allow Cook a catch at mid-wicket, just five runs short of a double century.

Hussey was Steve Finn’s third victim of the match and the young pace bowler then ripped through the Australian tail to finish with 6-125, his third five-wicket haul in Test cricket.

“It was a very tough day of Test cricket for us,” said the 21-year-old.

“Personally, to take six wickets is great but there are still plenty of things I want to improve on.

“To say that there’s a gulf in class is grossly wrong … Australia are on top at the moment but the nature of the way we’ve played our cricket over the last 18 months will stand us in good stead and that dog fight will come out.”

The day might have been very different but for the umpire referral system.

Hussey had added just one run to his overnight total of 81 when he was given out lbw to James Anderson but a review of the TV pictures showed the ball had pitched outside leg stump and umpire Aleem Dar’s decision was overturned.

Soon afterwards, he was giving thanks that England had already used the two reviews allowed in each innings when Dar turned down a loud shout for lbw from Anderson.

Replays showed Hussey would have gone had an appeal been available to England.

England will also rue missed catches from Cook and Anderson which would have curtailed Haddin’s innings but they did finally get a break from the TV umpire when they went out to bat.

England captain Strauss almost gave his side the worst possible start in the second innings.

He shouldered arms to the first delivery from Ben Hilfenhaus and was struck on the pad.

Umpire Aleem Dar gave the batsman not out but Ricky Ponting called for a video review which, fortunately for Strauss, showed the ball was going just over the stumps. A dismissal would have given Strauss a pair and left his team facing a bigger mountain to climb to save the first Test. He was out without scoring on the third ball of the match.

With two days remaining and no prolonged rain expected England face an uphill battle to avoid defeat in the first Test of the five-match series. 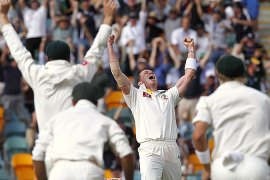