Inter join Barcelona and Manchester United as the last three Champions League winners, leading a group of seven teams into the knockout round.

Lionel Messi finished off a beautifully worked goal amid Barcelona’s 3-0 win at Panathinaikos while a Wayne Rooney penalty earned United a 1-0 victory at Rangers.

They were joined by Valencia, Tottenham Hotspur, Olympique Lyon and Schalke 04 in the hunt for European glory.

Valencia tore Bursaspor apart 6-1 to go through from Group C along with United, Tottenham made light work of Werder Bremen in a 3-0 win at White Hart Lane and Schalke beat Olympique Lyon by the same scoreline, a result that sent both sides through.

AC Milan and Olympique Marseille secured their qualification for the last 16 on Tuesday, joining Bayern Munich, Chelsea and Real Madrid, who had already made certain of their places.

Reports had said Benitez could be sacked if his stuttering treble winners, sixth in Serie A, lost against the Dutch champions but they did just enough to seal victory and progression with one Group A game to spare.

Wesley Sneijder’s free kick was deflected into the path of Argentina midfielder Cambiasso, who calmly fired home from inside the box on 55 minutes to thrill a half-empty and previously nervous San Siro.

The hosts grew in confidence after the goal but wasted two great opportunities to make the game safe and were clinging on at the end after Twente’s Denny Landzaat hit the bar.

Benitez made a slight tactical tweak, shifting Samuel Eto’o to the wing and playing Goran Pandev up the middle with playmaker Sneijder much further forward than usual.

This was to increase the attacking threat with only Eto’o in goalscoring form but also to prepare for Sunday’s Serie A game with Parma when the Cameroonian starts a three-match ban for
headbutting.

The ploy failed to work though as the hosts struggled to fashion many clear chances, devising some neat if nervous linkup play but then rushing a final shot in desperation given their shaky form.

Sneijder came closest in the first half when he rattled the bar with a free kick on 17 minutes before Pandev shot straight at the goalkeeper when well placed.

Inter players were so unsure of themselves that defensive errors and misplaced passes started to creep in and Twente very nearly profited.

Benitez could do little to change things in the second half given injury-ravaged Inter had four youth team players on the bench but his side found a new gear and after Cambiasso’s strike, Sneijder and Dejan Stankovic missed almost open goals.

Tottenham had no such problems in the other Group A match as they qualified in their debut season with first-half goals from Younes Kaboul and Luka Modric and a third from Peter Crouch in an easy win over Werder.

Klaas-Jan Huntelaar struck twice to steer Schalke to their equally emphatic victory over Lyon, with both sides going through from Group B after Portugal’s Benfica slumped to a 3-0 defeat at Hapoel Tel Aviv. 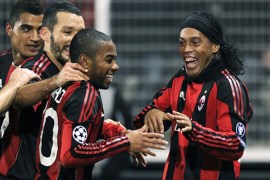 AC Milan and Marseille reach the last 16, but Arsenal’s hopes of joining them lie in the balance. 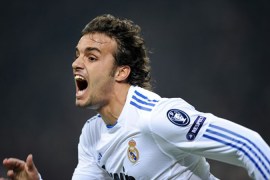 Pedro Leon’s injury-time goal powers Real to join Chelsea and Bayern in the last 16 of the Champions League. 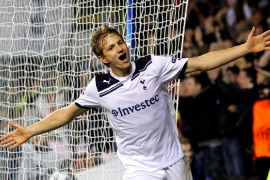