New Zealand’s batsmen surrendered meekly to the Indian bowlers in the second innings on a turning day-four pitch at the Vidarbha Cricket Association Stadium to give the hosts a 1-0 series win on Tuesday.

Paceman Ishant Sharma and off-spinner Harbhajan Singh led the attack which dismissed the tourists for a paltry 175 in the second innings to win the deciding Test by an innings and 198 runs, with more than a day and a half to spare.

Harbhajan, adjudged the player of the series for his all-round show with the bat and the ball, added the wickets of Gareth Hopkins and Ross Taylor to his overnight scalp of opener Tim McIntosh.

“It’s been a satisfying series, especially with the bat.

But I think I could have got a few more wickets,” the off-spinner, who scored two centuries in the series, told Neo Cricket channel.

The 30-year old lauded the pitch and said it had offered help to both batsmen and bowlers.

“This was probably the best wicket I have played on for many years now.”

Rahul Dravid got the man-of-the-match award for his patient 191 in the first innings for India.

The lanky Sharma attacked the stumps and clean bowled Kane Williamson, Tim Southee and Chris Martin to walk away with three wickets.

Left-arm spinner Pragyan Ojha removed Brendon McCullum and Martin Guptill leg before in consecutive deliveries while Suresh Raina chipped in with the wickets of Jesse Ryder and New Zealand captain Daniel Vettori with his part-time off-spin.

The five-match one-day international series between the two sides starts on Sunday at Guwahati in north-east India.

India, ranked number one in Tests in the world, will tour South Africa next month during which they will play three Test matches.

Captain Mahendra Singh Dhoni acknowledged the importance of the series for India against the number two-ranked side in the world in Tests.

“It is important for us as a team to do well in South Africa. After that there is the World Cup,” Dhoni said during the post-match presentation ceremony.

“We will try to take care of the process and accept whatever is the result. But we will like to give it our best shot.” 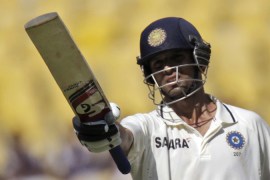 Rahul Dravid’s 191 puts India in a winning position against New Zealand in the final match of tied series. 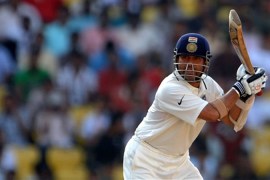 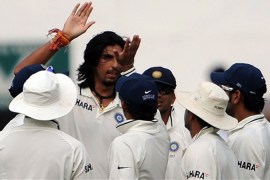