Inter Milan slumped to a 2-1 defeat at Chievo in Italy’s Serie A, increasing the pressure on beleaguered coach Rafael Benitez as his team dropped to sixth place, nine points off leaders and city rivals AC Milan.

Chievo striker Sergio Pellissier scored in the first half and teammate Davide Moscardelli added the second near the end of the match on Sunday, before Inter forward Samuel Eto’o pulled a goal back in injury time.

To add to Inter’s woes, Samuel Eto was caught on camera head-butting Chievo defender Bostjan Cesar in the chest in a scene reminiscent of Zinedane Zidane’s infamous clash with Marco Materazzi in the 2006 World Cup final.

Eto’o was not cautioned by the referee for his headbutt, but the Cameroon striker could be suspended retrospectively, which will dismay Benitez who was already without the likes of Diego Milito, Walter Samuel, Thiago Motta, Maicon, Julio Cesar and Coutinho for this match.

Inter lost 1-0 in the Milan derby last week, prompting club president Massimo Moratti to criticise the team’s approach to the match and warn Benitez that he expects a return to form.

Lazio stay in second place with 26 points after drawing 1-1 with Parma.

If Italian press reports are to be believed, anything other than a win against FC Twente in the Champions League on Wednesday will signal the end of Benitez’s Inter tenure.

Things could have been so different had Goran Pandev taken an early chance on 13 minutes.

Played in by Eto’o the Macedonia forward rounded goalkeeper Stefano Sorrentino but from a tight angle he shot against the post.

Inter were made to pay on 29 minutes as Sergio Pellissier rose above a static Davide Santon to send a bullet header from Nicolas Frey’s cross into the top corner.

Pellissier could have had a hat-trick by half-time but having twice got in behind the Inter defence, his first shot was deflected just past the post by Lucio, while the Brazilian defender put him under enough pressure to scuff his second effort wide.

In the second half it was again Chievo who came closer as Dejan Stankovic had to whip the ball off Luca Rigoni’s foot to deny a certain goal.

Although Sorrentino made great saves from Stankovic and Eto’o, Chievo’s Gelson Fernandes should have made it two but dragged his shot wide of the far post with a grounded Luca Castellazzi helpless to intervene.

Eto’o scored a brilliant individual goal deep into injury time after a mazy solo run but it was too little too late.

Juventus’ Claudio Marchisio and Milos Krasic scored in the first half to give their team a comfortable 2-0 win at Genoa.

Juventus took the lead when Krasic crossed to Fabio Quagliarella at the far post. The striker headed back into Marchisio’s path and the midfielder’s low shot deflected off Dario Dainelli in the 18th minute.

Krasic doubled the lead in the 23rd. He cut in from the right wing, dribbled past Domenico Criscito and hit a low shot that goalkeeper Eduardo got a hand to but couldn’t stop from rolling in at the far post.

Genoa made Juventus work for the victory and twice hit the goal frame. 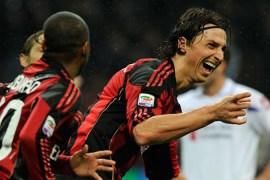 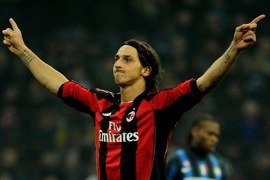 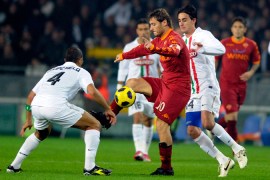