India bowlers Shantakumaran Sreesanth and Ishant Sharma ripped through the top order and produced inspiring spells to leave New Zealand tottering at 148 for seven on the first day of the third and final Test at the Vidarbha Cricket Association Stadium.

Brendon McCullum (34) and Tim Southee (7) were at the crease at the close of the shortened day, marred by a wet outfield that delayed the start of play by three hours, after draws in the opening two matches at Hyderabad and Ahmedabad.

Sreesanth (two for 20) got India off to a perfect start by removing both New Zealand openers in successive overs of his spell with the new ball.

He induced an edge from Martin Guptill for wicketkeeper Mahendra Singh Dhoni to take a comfortable catch in the seventh over of the innings and then bowled left-hander Tim McIntosh to reduce New Zealand to 16 for two.

Sharma (two for 32) took both wickets in his second spell, after he had changed ends. He trapped Ross Taylor lbw for 20 and bowled Vettori, who edged the ball on to his stumps.

New Zealand were reduced to 51 for five at that stage, with McCullum yet to bat. McCullum, who scored a double-century opening the innings in the previous Test, suffered a slight back injury during training this morning and was not able to bat in the top order.

The visitors gambled by including McCullum, hoping that the last Test’s double centurion could bat in the middle order.

McCullum, who had opened in the last two matches, walked in at number eight and New Zealand’s hopes for a sizeable first-innings total will firmly rest on him.

Ojha also removed Gareth Hopkins in the final session and then Harbhajan Singh came on to break a developing partnership between Jesse Ryder and McCullum.

Ryder, carrying a calf muscle injury that has prevented him from bowling, slashed at a ball outside the off-stump to give Suresh Raina a low catch in the covers after hitting 59 from 113 balls, including five fours.

“It has been a good performance from us since McCullum is the only main batsman left,” Ojha said.

“It is only a matter of time before we get the remaining wickets.” 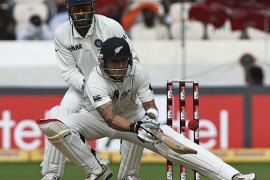 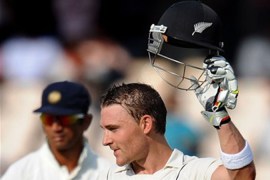 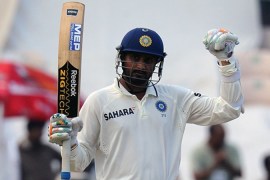