Robin Soderling looked in superb form ahead of the season-ending ATP World Tour Finals when he beat home favourite Gael Monfils to claim his first Masters title in Paris.

The fourth-seeded Swede hit a forehand volley to clinch his sixth career title with a confident 6-1, 7-6 victory, the result seeing him pass Andy Murray of Britain to rise to a career-high No4 in the rankings.

Soderling, twice a French Open runner-up, was simply too good for Monfils and wrapped up a straightforward victory by taking the second-set tiebreak 7-1 on Sunday.

His blend of raw power and pace proved too much to handle for the Frenchman, who was condemned to his second successive final defeat in Bercy.

Backed by a 14,500 capacity crowd, Monfils never discovered the touch that helped him to knock out 16-times grand slam champion Roger Federer on Saturday.

As usual, Soderling relied heavily on his powerful first serve. He hit nine aces and never faced a break point.

Soderling played aggressively in the first set to put the 12th-seeded Monfils under pressure, winning eight of ten net points and hitting 12 winners to only six for Monfils.

Soderling broke in the fourth game when Monfils sent a forehand volley wide. He then fired a backhand pass across court to again break Monfils and increase his lead to 5-1.

The Swede took the first set when a backhand pass from Monfils sailed long.

In the tie-breaker, Soderling won his service points while Monfils dropped three, including match point.

Soderling jumped to a 3-0 lead and hit a forehand winner on the line followed by an ace for a 5-1 advantage.

He now heads to London, where the ATP Finals will be played from November 21 at the O2 Arena.

In the doubles final, Mahesh Bhupathi of India and Max Mirnyi of Belarus won their eighth title by defeating the unseeded pair of Mark Knowles of the Bahamas and Andy Ram of Israel 7-5, 7-5. 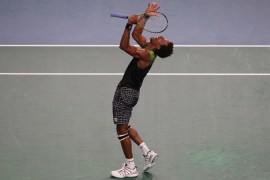 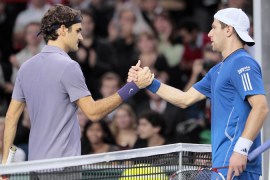 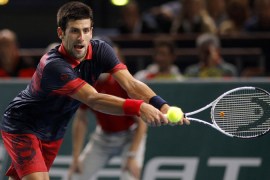 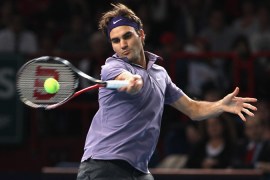