India spinner Harbhajan Singh ripped through the New Zealand bowling attack on Sunday hitting an unbeaten 85 to help India take an 86-run first innings lead in the second Test, with a wicket still in hand.

India were 436-9 at close on the third day in Hyderabad in reply to New Zealand’s 350 as Harbhajan Singh produced his third consecutive Test score of above fifty.

He struck seven fours and five sixes off just 82 deliveries and added 69 runs with last-man Shantakumaran Sreesanth (14 not out). He smashed New Zealand captain Daniel Vettori for two consecutive sixes over long-on and retained most of the strike when batting with Sreesanth.

The right-hander followed up scores of 69 and 115 in the first Test at Ahmedabad by bludgeoning the New Zealand attack again to bring up his ninth half-century in Tests after Vettori had orchestrated a batting collapse.

Vangipurappu Laxman (74) scored his 48th half-century and added 75 runs with Rahul Dravid (45) for the fourth wicket before Dravid was trapped plumb in front by paceman Tim Southee.

The stylish Laxman, playing his first Test in front of his home crowd at the Rajiv Gandhi International Stadium, also added 52 runs for the fifth with Raina, who holed out to Martin Guptill at mid-wicket trying to hit Vettori out of the ground.

Laxman was out leg before immediately after the tea break and was followed soon after by Dhoni (14), who was deceived by Vettori’s flight and scooped one straight to Brendon McCullum at short cover.

The hosts lost the wickets of Dravid and Raina (20) in the second session after the loss of Tendulkar (13) in the fifth over of the day.

Tendulkar tried to break the shackles, imposed on him by some fine swing bowling by paceman Chris Martin, by dancing down the wicket to Vettori but only managed to get a thick edge. Ross Taylor at slip took a smart one-handed catch.

“It has been a fantastic innings by Harbhajan,” said Laxman.

“He batted to save the last Test match for us and played an attacking knock today and his partnership with Sreesanth has actually put us slightly ahead in the match.”

Laxman hoped Harbhajan would get some more runs on Monday.

“Everyone knows that a lot can happen on the fourth and fifth days of Test matches in India, so any more runs will help us. We were hoping for a 100-run lead and once we are there, we can look at winning the match,” he said.

The three-match series is tied at 0-0 after the opening Test was drawn. The third and final Test will be played in Nagpur from November 20-24. 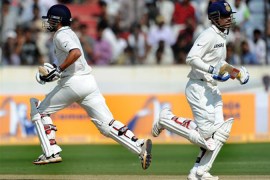 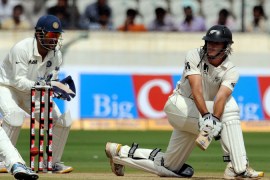 McIntosh in solid start for Kiwis

India battle to make in-roads as New Zealand take control of the first day of the second Test in Hyderabad. 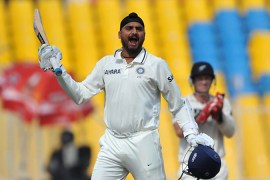