Mohammed Hafeez’s half-century guided Pakistan to 144-2 in their first innings on the second day of the first Test at the Dubai International Cricket Stadium, after Umar Gul had earlier led an impressive fightback to limit South Africa to just 380 on Saturday.

At stumps, Younis Khan (21 not out) and Azhar Ali (12 not out) were at the crease after Hafeez (60) and Taufeeq Umar (42) put on 105 runs. The latter fell in quick succession but it was a still good comeback from Pakistan after Gul and the spinners had sparked a Proteas collapse.

The morning session belonged to Pakistan as South Africa lost six wickets for 54 runs before lunch.

Gul was at the heart of the collapse, snatching three for 19 in 8.3 overs as he kept an excellent line just outside off stump and extracted just enough seam movement to trouble the batsmen.

Pakistan’s performance in the field was all the better for the fact left-arm seamer Wahab Riaz was unable to bowl after straining his side on the opening day.

The team said the injury was severe enough to rule him out of the rest of the series.

Proteas started the day strong at 311-3 but the last eight wickets fell for the addition of 73 runs.

South Africa lost nightwatchman Harris early when he was caught at second slip off Gul for a duck.

Gul then produced a superb delivery which nipped back off the seam to bowl AB de Villiers for five through the gate before the 26-year-old trapped Ashwell Prince leg before for one.

Rehman then had Mark Boucher lbw for nine before Ajmal picked up the important wicket of all-rounder Jacques Kallis.

Kallis, who had added 20 to his overnight 53, edged to keeper Adnan Akmal before Rehman bowled Johan Botha (10) with a turning delivery that clipped the top of the off stump. 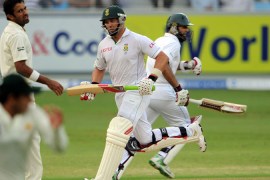 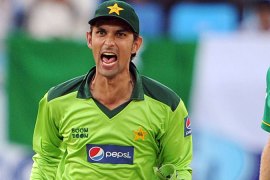 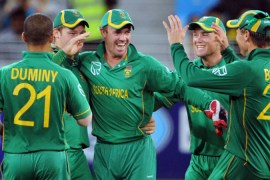 Thrilling third one-dayer ends in a two-run victory over Pakistan.