The highly anticipated Manchester derby fizzed out on Wednesday night as Manchester United drew 0-0 at Manchester City to let Chelsea stretch their lead at the top of the English Premier League with a 1-0 win over visiting Fulham.

Derided by United manager Alex Ferguson as “noisy neighbours”, City failed to make an impression on the 18-time domestic champions but they were at least spared the agony of last season when they lost both league meetings to last-gasp goals.

The Manchester rivals created few chances at the City of Manchester Stadium and United’s fifth draw from six away games this season leaves them four points behind the defending champions Chelsea.

Chelsea stole a march on their title rivals as Essien’s first-half goal proved enough to beat Fulham, although the Ghanaian blotted his copybook when he was sent off late on for a lunge at Clint Dempsey.

Essien was unmarked on the half hour to head in Salomon Kalou’s cross but Chelsea, beaten 2-0 at Liverpool on Sunday, were slapdash in front of goal and failed to kill off their west London rivals who have not won at Stamford Bridge since 1964.

Chelsea have 28 points from 12 games with United on 24 and Arsenal, for whom Marouane Chamakh scored both goals in a 2-0 win at struggling Wolverhampton Wanderers, third on 23. City complete the top four on 21.

Newcastle stayed in fifth place despite a 2-1 home defeat to Blackburn, followed by six teams tied on 16 points.

Manchester City struggled to break down a defence marshalled by man-of-the-match Nemanja Vidic, while United had little cutting edge with Wayne Rooney injured and Javier Hernandez only a 78th-minute substitute.

“City are very difficult to beat on their own ground,” United manager Alex Ferguson said.

“I think there was too much tension for it to be kind of match people thought it would be.”

United lost fullbacks Rafael da Silva and Patrice Evra to injury but retained its defensive shape with Wes Brown and John O’Shea on as substitutes.

Arsenal recovered quickly from Sunday’s 1-0 home defeat against Newcastle, going ahead after just 39 seconds when Chamakh headed in a cross from by Alex Song.

Wolves goalkeeper Marcus Hahnemann kept the deficit to a single goal until Chamakh finished from a pass by Cesc Fabregas in the final seconds of injury time.

Morten Gamst Pedersen and Jason Roberts scored to give Blackburn manager Sam Allardyce victory on his return to former club Newcastle, who are now just one point ahead of Bolton, Tottenham, Sunderland, Liverpool, Aston Villa and West Bromwich Albion.

Fernando Torres scored his third goal in two games to put Liverpool ahead in the seventh minute, but Hugo Rodallega equalised seven minutes into the second period to halt Liverpool’s four-match winning streak.

James Collins scored with a minute left to earn victory for Villa, who also got goals through Stewart Downing and Nathan Delfouneso before bringing on American defender Eric Lichaj in the 90th for his Premier League debut. 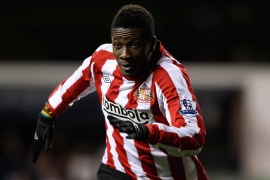 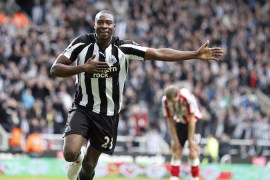 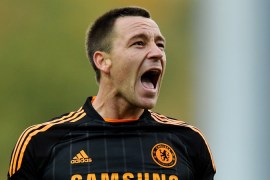