Bad news about the Commonwealth Games may have been splashed across the world’s newspapers in the past weeks but the tournament got underway with swimming heats on Monday following a spectacular opening ceremony.

The Indian media gave their home nation a break after weeks of justifiably-negative stories about some shoddy buildup to the 12-day event, which mostly features former British colonies.

India had hoped the $6 billion Games would showcase its growing economic power in the same way as China’s image benefited from the 2008 Beijing Olympics.

Corruption, slapdash construction, health and security issues blighted the build-up, however, bringing into question India’s ability to host a world-class event and forcing the government to step in to ensure everything was ready on time.

“The show did more than just entertain those present,” influential daily The Hindu said on its front page.

“It left the audience upbeat and restored the country’s pride that has been so badly bruised in the weeks gone by.”

Newspapers also reported long delays for dignitaries getting into the stadium, a result of the huge security operation that surrounded the event.

Some athletes withdrew from the Games because of concerns about security in India, which have been particularly acute after the militant attacks on Mumbai which killed more than 100 people in November 2008.

Spectators were thin on the ground at the SP Mukherjee Aquatics complex for the first swimming action on Monday but the failure of several top names to make it through the heats emphasised the depth of quality in the pool at the Games.

Gold medal favourite Nick D’Arcy, the Australian swimmer who missed the Beijing Olympics after being banned for punching a teammate, finished ninth in qualification for the 200m butterfly and will miss the final.

“It’s pretty tough. I didn’t go as well as I wanted,” said D’Arcy, who finished second behind Michael Phelps at the Pan Pacific Games earlier this year.

“I’ve worked hard for this. It’s a big international event so it hurts, but there are bigger and better things in the coming years.”

The first morning did not pass off without problems for organisers either.

Inaccurate test scales had a string of boxers unnecessarily trying to shed weight to get into the desired category at the Talkatora Indoor Stadium and another weigh-in has been scheduled for Tuesday.

“The athletes weighed themselves on the test scales, and found themselves to be over. They got back to the sauna trying to lose some weight and when they came back, they weighed more than the last reading,” Australia team spokesperson John Gatfield told the Reuters news agency.

“It was really ridiculous.”

“All this fuss is created by the teams who have overweight boxers in their team,” he said.

England’s Rebecca Adlington complained about the length of time it took to get around the congested city after making it through to the final of the women’s 200m freestyle swimming.

“I have no time at all,” the double Olympic champion said.

“It is like an hour back into the village with all the traffic … it is so crazy to be honest and not the way any one of us would normally train.”

Eight medals are up for grabs on the first day of action, the first coming in weightlifting where local hope Soniya Chanu is in with a good chance of keeping the smiles on Indian faces. 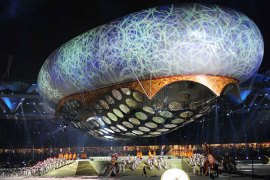 Spectacular show kicks off 11 days of athletic competition after weeks of bad publicity over country’s preparedness. 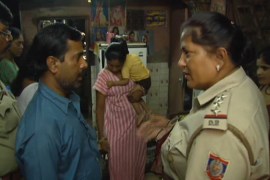 One parent searches for daughter thought to have been sold to New Delhi brothels ahead of the Commonwealth Games. 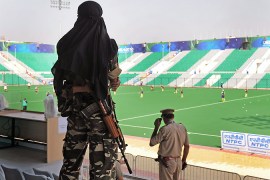 Sports back on agenda in New Delhi

Ongoing concerns over security and facilities at the Commonwealth Games have abated somewhat ahead of Sunday’s opening.