Portuguese forward Ronaldo, who lost his World Player of the Year crown to current holder Messi, has now netted an incredible 10 goals in his last four league outings to take his tally for the season to 11.

After scoring four against Racing Santander last weekend following braces against Malaga and Deportivo Coruna, he struck two late goals at Alicante-based Hercules to keep Real at the top of the standings with 23 points from nine matches.

Argentina forward Messi grabbed his sixth and seventh of the season, Spain striker David Villa scored twice and former Sevilla player Daniel Alves netted one as Barca kept the gap to Real to one point with a dominant home performance.

Valencia’s poor run continued when they were held to a 1-1 draw at home by struggling Real Zaragoza earlier on Saturday, while Villarreal can draw level with Barca on 22 points with a win at Sporting Gijon on Sunday.

Hercules stunned Barca 2-0 at the Nou Camp in September and looked poised to pull off a second major giant-killing of the season when they took a shock lead over Real in the third minute at their Jose Rico Perez stadium.

With an annual budget of around $56 million, Hercules have about a 10th of Real’s resources but they were able to frustrate Jose Mourinho’s expensively assembled side until seven minutes after half time.

Juan Calatayud fumbled a long-range Ronaldo effort and Angel Di Maria fired the rebound into the roof of the net.

The home side looked like holding on for a deserved point until the 82nd minute when Marcelo drove in from the left wing and Ronaldo was on hand to sidefoot home the rebound from Karim Benzema’s shot.

The Portuguese grabbed his second four minutes later when Benzema pulled the ball back and he drove it past Calatayud.

Real coach Mourinho, who moved to the Spanish club from Inter Milan at the end of last season, said he was annoyed his side had conceded the early goal.

“We were playing practically on our own in the second half,” the Portuguese said.

“The most important thing was the three points that keep us in first place in the league for another week.”

Barca came roaring out of the blocks at the Nou Camp in the late kickoff and Messi put the champions ahead in the fourth minute before Villa curled in a sublime second in the 24th.

Sevilla defender Abdoulay Konko was shown a second yellow card and dismissed shortly before halftime and Brazilian fullback Alves put Barca three ahead against his old club eight minutes into the second period.

Messi raced through and sent a precise low shot past stand-in keeper Javi Varas for Barca’s fourth in the 64th and Villa wrapped things up with a carbon copy of Messi’s second in the 90th.

Valencia had been the season’s early pace-setters, sparking hopes of a genuine challenge to the dominance of Real and Barca, but have now taken just one point from their last three games and slipped to fourth.

In an action-packed opening at the Mestalla, defender Maurizio Lanzaro fired the visitors ahead in the third minute when he controlled the ball with his back to goal and volleyed home on the turn.

After Valencia’s Ricardo Costa had almost equalised with a header against the post, Italian Lanzaro turned from hero to villain just before halftime when he inexplicably nodded the ball over his own keeper and into the net to make it 1-1.

Zaragoza midfielder Ander Herrera was harshly shown a straight red card for a trip on Juan Mata in the 67th minute but a winner eluded the home side and prompted frustrated whistling from their fans at the end of the match.

Valencia have 17 points from nine games while Zaragoza, still without a win, are second from bottom on four. 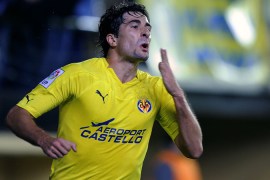 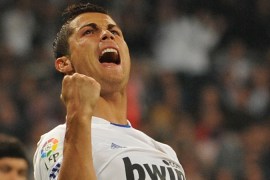 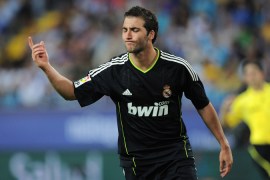