There was no sign of panic from the San Francisco Giants after they suffered their first loss in the World Series.

After winning the first two games at home in the best-of-seven series, the Giants were brought back down to Earth in a 4-2 setback in Texas on Saturday.

They still lead 2-1 but their hopes of romping through the series have been dashed.

The Giants and the Rangers may have been unlikely finalists but they could yet produce a classic series.

Giants manager Bruce Bochy was sticking to the sportsman’s mantra of taking it one game at a time.

“We’ll go out there and give it our best,” he said.

“We’ll go out there and play the game hard for nine innings. We’ll see what happens.

“You know, it’s nice to be in our position right now, but we have a lot of work ahead of us.”

Bochy was also quick to praise the Rangers, who reached the World Series for the first time by beating the American League East-winning Tampa Bay Rays then the defending champion New York Yankees.

“We’re playing a very good club and we didn’t think this would be easy. They played very well tonight, and tomorrow hopefully we’ll get back on track here with the bats,” he said.

Pat Burrell, who has struggled against the Rangers and suffered the embarrassment on Saturday of striking out four times – colloquially known as “the Golden Sombrero” – was at a loss to explain his slump.

He said he was still happy with the team’s position.

“I have picked a bad time to struggle,” said Burrell, still looking for his first hit of the series.

“But we all have to a better job offensively. We know that.

“We knew we were up against a great team. It’s going to be tough for us to come out tomorrow and do better.” 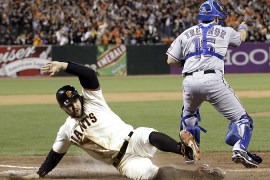 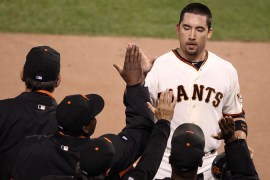 San Francisco batters come out on top in first match of World Series with 11-7 win over visiting Texas. 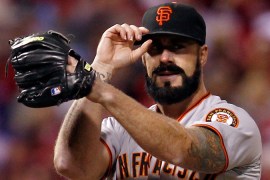