Kim Clijsters took time to settle after a car crash on the way to her WTA Championships semi-final against Sam Stosur in Doha, but there was no stopping the Belgian once she clicked into top gear.

The 27-year-old US Open champion beat Stosur 7-6 6-1 to reach the final of the $4.55 million tournament in the Qatari capital, where she will face Caroline Wozniacki after the world number one blitzed Vera Zvonareva 7-5 6-0 in the other semi.

Clijsters, who said on her Twitter site that she was “very lucky” to escape unhurt from the crash, lost the opening three games of the first set and had to fight off a set point before taking it in a tiebreak.

“Samantha and I have had some really tough matches against one another throughout our whole careers so I knew that I had to be ready to come out here and try and play my best,” Clijsters said in a courtside interview.

“I played well at the important points and I think that’s why I won the first set. In the second set I felt maybe she dropped her game a little bit.

“I had an early chance to break, and I did, and that gave me a little bit more confidence to try to serve it out every time.”

Stosur has enjoyed a breakthrough singles season, reaching the final of the French Open and rising to a career-high fifth in the world earlier this year, but the 26-year-old Brisbane native found Clijsters too hot to handle.

Producing some of her best tennis of the tournament, Clijsters raced to a 3-0 lead in the second set as Stosur wilted in the face of the Belgian’s searing serve and consistent groundstrokes.

Clijsters broke to go 5-1 up with a sumptuous backhand down the line, and she put the same weapon to good use in the final game, bludgeoning Stosur into the corners before sealing victory in a 26-minute second set.

It will be Clijsters’s third appearance in the Tour Championships final.

In a match-up of the world’s top two, Wozniacki and Zvonareva were in danger of tiring themselves out in a titanic 12-minute opening game in which the Dane fought off a string of break points before holding serve.

That seemed to take the wind out of Zvonareva’s sails, and she quickly went 4-1 down with the set looking beyond her.

However, the Russian steadied and had two set points at 5-4 with Wozniacki suddenly vulnerable.

At 20 Wozniacki is the youngest competitor in the field but she showed the composure of a veteran to save the set and turn the tables on Zvonareva, levelling at 5-5 before going on to seal the set 7-5.

Zvonareva, once again donning the Qatari colours of maroon and white, had just dropped her first set of the tournament.

It was not long before she dropped her second.

Wozniacki powered through the second set with ease while her Russian opponent fell apart, sitting on her stool with a towel over her head as if looking for a place to hide.

“I was up 4-1 in the first set then suddenly she has two set points, and then I turned it around again and won the second set,” Wozniacki said, adding that she would enjoy the win before thinking about Clijsters. 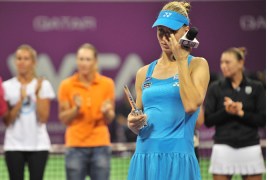 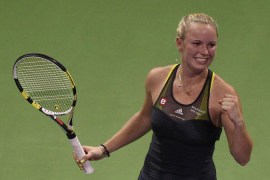 Wozniacki cements place at the top

Dane ensures she will end the season as world no1 and reaches WTA Championships semi-final with win over Schiavone. 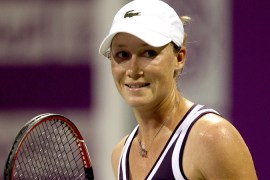 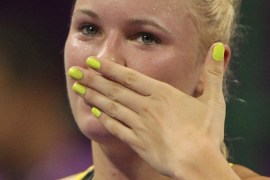