Valencia secured top spot in the Spanish Primera Liga for another week when Aritz Aduriz and Vicente Rodriguez fired them to a 2-1 home win over Athletic Bilbao.

The win takes Valencia four points ahead of the chasing pack led by Villarreal and Barcelona, who play on Sunday, with Real Madrid a further point behind before their weekend match.

Few expected the financially-troubled club would have the quality to repeat last season’s third-place finish after they were forced to sell prize assets David Villa and David Silva.

However, Valencia’s new signings Aduriz and Roberto Soldado have the makings of a formidable strike partnership.

Aduriz, who joined from Real Mallorca in the close season and has drawn comparisons with former Manchester United and Barcelona forward Mark Hughes, nodded Valencia ahead in the 11th minute at a packed Mestalla.

Valencia’s ex-Getafe striker Soldado forced his way into the area from the right and visiting goalkeeper Gorka Iraizoz could only palm his dinked cross on to the head of Aduriz, who steered the ball into the empty net.

Athletic posed more of a threat in the second half and after Valencia substitute Vicente scored a well-taken breakaway goal in added time the visitors struck with a superb free kick from Igor Gabilondo moments later to set up a frantic finish.

“We weren’t able to kill off the match despite having a lot of possession and they put us under pressure in the second half,” Aduriz said in a television interview.

Asked whether he and Soldado should play together up front every week, he added: “The coach is the one who decides and the team has lots of options which is what matters.”

A bizarre own goal by hapless Espanyol defender Juan Forlin handed promoted Real Sociedad their second victory of the season earlier on Saturday.

Substitute Jeffrey Sarpong fired a long-range free kick against the post in the 85th minute at Sociedad’s Anoeta stadium and the ball cannoned back against Forlin’s body and dribbled over the line with goalkeeper Carlos Kameni stranded.

Victory for the San Sebastian club, which left Espanyol coach Mauricio Pochettino shaking his head in disbelief, ended a run of three straight defeats and lifts them to seven points from six matches.

Espanyol stay in sixth place on nine points ahead of Sunday’s games.

Winless Real Zaragoza were heading for a fourth defeat in six games in the early kickoff when Czech midfielder Jiri Jarosik was sent off in the 47th minute and they went 2-0 down at home to Sporting Gijon two minutes later. 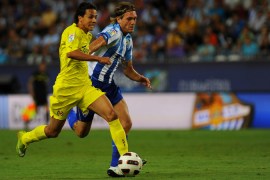 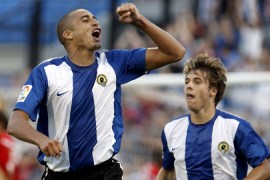 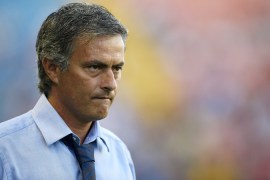 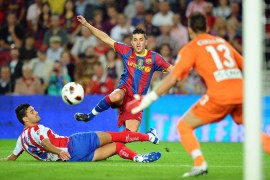