Lee Westwood and Luke Donald set the tone as Europe charged nine-and-a-half points to six-and-a-half ahead of the United States with an inspirational display in the third session of the weather-hit Ryder Cup.

Leading in all six unfinished matches overnight, the unstoppable Europeans now need only five more points to wrest the trophy away from the holders in Monday’s concluding 12 singles.

With Europe trailing 6-4 on Sunday morning, Westwood and Donald earned the first point of the day by crushing American heavyweights Tiger Woods and Steve Stricker 6&5 in the foursomes – world number one Woods’ heaviest Ryder Cup defeat.

Northern Irishmen Graeme McDowell and Rory McIlroy followed suit by beating Zach Johnson and Hunter Mahan 3&1 in their foursomes to level the overall score at 6-6.

Britain’s Ross Fisher produced some of the best golf of the week as he and Padraig Harrington won their fourball encounter against Jim Furyk and Dustin Johnson 2&1 but the Europeans then had to fend off a spirited American fightback late in the day.

At one point Europe trailed in one match and were all square in two but a flurry of sparkling approach shots and ice-cool clutch putts in late afternoon sunshine at Celtic Manor kept red US numbers off the board.

“All credit to every one of them.

“We’ve said it all week, if you get momentum in this Ryder Cup, it’s good and when Woods loses as convincingly as that, it helped us all day. A fantastic day, not to lose a game.”

Peter Hanson and Miguel Angel Jimenez squandered a two-up lead after seven holes to be level after 14 before they rallied to beat Bubba Watson and Jeff Overton two up in their fourball match.

Britain’s Ian Poulter and German Martin Kaymer led by three after eight holes against Americans Phil Mickelson and Rickie Fowler but were pegged back to all square before winning 2&1.

In the final twist of the day, Francesco Molinari sank a three-foot birdie putt at the last to steal a valuable half point for Europe with his brother Edoardo after they had been dormie one down to Stewart Cink and Matt Kuchar.

The Europeans narrowly failed to complete the first clean sweep in a session at the biennial team event since the home side won all four Saturday fourballs at The Belfry in 1989.

“I am really proud of my guys,” US captain Corey Pavin said.

“They have hung tough today.

“They know what they have to do and they will go out and play hard again tomorrow. Hopefully they will figure out how to do it and get it done.” 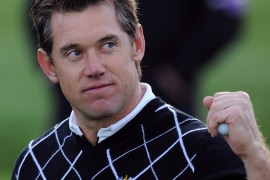 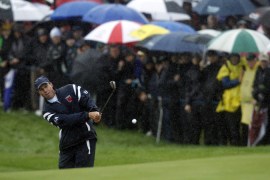 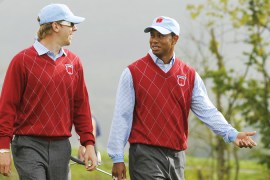