World number one Caroline Wozniacki blew Elena Dementieva off the court as she opened her assault on the season-ending WTA Championships with a 6-1, 6-1 victory in Doha.

Russian Dementieva, the former world number three, rarely troubled the Dane who lapped up the plaudits from a partisan crowd of mainly expats and schoolchildren in the Qatari capital.

On a balmy desert night, Wozniacki, 20, continued her lifelong push to be the best in women’s tennis – a mark she will only truly reach when pitted consistently against Serena Williams, injured for this $4.55 million tournament.

That belief shone through in the 30C heat against world number nine Dementieva, who at age 29 has, like her opponent, never won a grand slam tournament.

Losing the US Open final in 2009 is the closest Wozniacki has come to clinching one of the big four.

And while the Doha trophy – contested by the top eight available players in the world – would be the best of the Dane’s six tour wins so far, it is no slam.

Dementieva’s record will be one that Wozniacki, is desperate to avoid sharing with another who has promised much but failed to cross the finish line on the highest stage.

Jelena Jankovic is herself a former world number one but missed her chance at picking up one of the top prizes when she lost to Ana Ivanovic in the 2008 French Open final.

The Serb was crushed 6-3, 6-0 by Vera Zvonareva in Tuesday’s first match at Khalifa International Tennis Complex.

“I think it just happened that way that, you know, on the first day we had to matches like that. That’s tennis,” Russian Zvonareva said of her 53-minute victory.

“One day you can have a match that’s played in 30 minutes, and the next week you play the same opponent and it can take three and a half hours.”

Jankovic’s continued participation in the tournament was in doubt on Tuesday night as she missed her post-match press conference through illness.

The eight players are split into two round-robin groups, Maroon and White after the colours of the Qatari flag, with Wozniacki and Stosur victors in Maroon and Zvonareva in White.

Victoria Azarenka and Kim Clijsters make their bows on Wednesday, with the semi-finals slated for Friday and Saturday before Sunday’s final.

The 7,000-capacity Khalifa stadium’s stands were by no means full for the opening night of the big names in women’s tennis, with the three highest tiers virtually empty.

But Wozniacki said that she had no problems with the numbers watching her performance on the purple-and-green Centre Court.

“I actually thought there was quite a few people there. I thought it was a good atmosphere,” Wozniacki said.

“Of course you feel it when you’re the fan favourite, when the people are for you, and that always helps me a little bit and gives me that extra push in the right direction.” 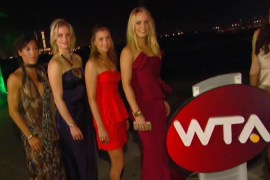 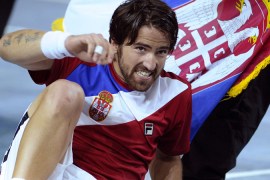 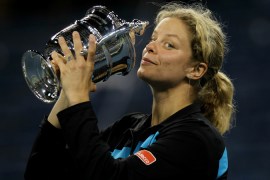