It came on the night that Serbia fans rioted in Italy in an incident that could see the team excluded from Euro 2012.

Ranked 40th in the world compared to England in sixth, Montenegro only joined Europe’s governing body Uefa in 2007 after splitting from Serbia.

And they almost took the spoils in their European qualifier in London on Tuesday, England keeper Joe Hart seeing a shot from Milan Jovanovic come crashing off his crossbar on 83 minutes.

Montenegro stay top of Group G as they plot a shock course towards the Euro 2012 finals in Poland and Ukraine.

A busy night of European qualifying was marred by riots by Serbia fans in Genoa, causing their match with Italy to be abandoned.

Serbia are likely to learn their fate, ranging from a fine to possible expulsion from the competition, later this month.

European football’s governing body Uefa confirmed on Wednesday it had opened an investigation into the incidents and its disciplinary committee had proposed October 28 as the date to review the case.

The match in Genoa was called off after away fans threw flares on the pitch and at Italian supporters, having earlier hurled one into their own team’s bus.

Serbia goalkeeper Vladimir Stojkovic had pulled out of the Group C match in Genoa before kickoff after he was abused by his own fans during the bus incident in what reports said was violence connected to domestic club rivalry.

Portugal’s revival continued with a 3-1 win in Iceland, while the Netherlands beat struggling Sweden 4-1 and Armenia continued their own surprising campaign with a 4-0 win over Andorra.

Germany continued their 100 per cent record with a 3-0 win in Kazakhstan thanks to Miroslav Klose, Mario Gomes and Lukas Podolski to move them to 12 points from four games in Group A.

Turkey have half that after Rashad Sadygov’s 38th minute winner saw them fall to defeat in neighbouring Azerbaijan.

Villa’s penalty gave the visitors a half-time lead and Andres Iniesta scored a second just after the break.

Steven Naismith pulled one back before the hour and Gerard Pique’s own goal pulled the hosts level only for Fernando Llorente to fire in a winner 11 minutes from time.

Spain are top of Group I with nine points from three matches.

Netherlands striker Dirk Kuyt was taken to hospital with a serious ankle injury after he landed awkwardly when jumping for a ball with Sweden’s Daniel Majstorovic.

“He is now in a hospital but following the doctor’s first opinion it could be very serious and keep him sidelined for a long time,” Dutch coach Bert van Marwijk said.

The Dutch top Group E with 12 points, twice as many as Sweden.

Yoann Gourcuff scored one goal and set up the other in a classy individual display as France laboured to a 2-0 home win over 10-man Luxembourg.

The Lyon playmaker created the opener for Karim Benzema midway through the first half and netted the second 15 minutes from time as Les Bleus strengthened their lead at the top of Group D.

Cristiano Ronaldo scored from an early free kick to set Portugal on the way to a 3-1 win over Iceland in Group H.

Ronaldo’s third minute free kick after a foul on Carlos Martins in front of the Icelandic box was not as powerful as his usual trademark efforts, but keeper Gunnleifur Gunnleifsson was slow to react and let the ball go in to his right.

Iceland tried to use their aerial advantage and were rewarded on 17 minutes when Heidar Helguson headed in from a corner.

Raul Meireles unleashed an unstoppable shot from 30 metres 10 minutes later before substitute striker Helder Postiga made it 3-1 on 72 minutes.

If Montenegro – population 620,000 – reached Poland and Ukraine they would be the smallest country ever to feature in the finals.

Seeded fifth of the five nations in Group G when the draw was made in February, they came to the game as group leaders after 1-0 wins over Wales, Bulgaria and Switzerland and left still three points clear of England with a game extra played.

“It was disappointing and frustrating and they made it very tough for us,” England midfielder Gareth Barry said.

“If that shot had gone in, they would have walked away with three points, but on the other hand, we still have seven points out of nine and we still have qualification in our own hands.”

Montenegro’s Croatian coach Zlatko Kranjcar said: “It was not a miracle and although it was a result that exceeded our expectations, it proves this team has the strength and talent to reach its goal, which is the playoffs.” 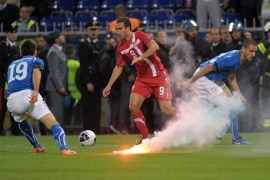 Serbian fans boo and throw flares, prompting referee to halt a match with Italy after six minutes of play. 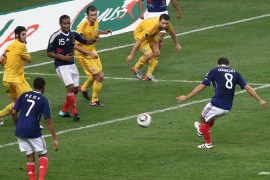 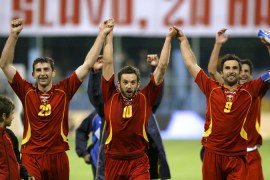 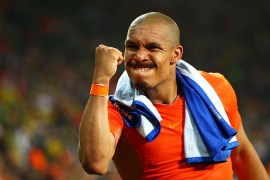