Police shut fans out of the cycling road race as New Delhi faced more embarrassment over its hosting of the Commonwealth Games.

While previous events had been blighted by the fact that fans chose not to attend, Sunday’s race – won by Australia’s Allan Davis in the men’s and Rochelle Gilmore in the women’s – saw a virtual curfew of the Indian capital’s central districts.

Cyclists made their way through some of the city’s British-era landmarks and wide leafy boulevards on a 13.7-km route, dodging past scampering stray dogs, while newspapers and plastic bags blew in the hot wind.

Images of desolate roads and stands were beamed across the world, bringing more bad news for a Games that has lurched from one crisis to another.

There was no official bar on spectators but access to the venue was virtually denied after police blocked off roads, diverted traffic and closed down some underground stations to enforce security in a city with a history of attacks.

As the cyclists rode up and back the grand King’s Way from the India Gate memorial, the wide lawns on either side lay empty, contrasting with a normal Sunday when the place jostles with tourists, picnickers and young lovers.

Police said security was paramount and that securing a road event in a city of 16 million people was always more challenging.

“It was an outdoor and open event so security was required at designated places,” said Rajan Bhagat, spokesman of Delhi Police.

“We haven’t received any (complaints) from general public or Games visitors. Only necessary barricades and pickets were erected to ensure smooth flow of the cycling event.”

Athletes and team coaches have complained about woeful attendances.

Erratic security measures and the myriad of problems in the build-up and during the Games have kept away the fans, leaving many athletes, including Indian gold medal-winners, to compete before near-empty stands.

One athlete who may have preferred to have no witnesses at his event on Sunday was Australia’s Michelangelo Giustiniano.

His team’s oldest athlete at a month short of his 58th birthday, Giustiniano missed out on shooting silver after accidentally shooting a rival’s target – contributing to the other competitor’s score.

Giustiniano could only raise his eyes in horror when he realised he had blown his chances of a medal after firing five shots into the target of Singapore’s Lip Meng Poh in the men’s 25m centrefire pistol event.

“I don’t recall this ever happening. It’s crazy. I’ll get my head around it eventually. It’s not only tough to take, but the chances of me making up for this are slim,” Giustiniano said.

Giustiniano’s scoreboard was left blank while nines and 10s popped up on his rival’s monitor causing all-round confusion.

Some of Giustiniano shots counted towards Poh’s score of 49, giving him bronze and leaving the Australian in fifth.

The 57-year-old may console himself by taking his gold medals from 1994 and 1998 out of the attic when he gets home. 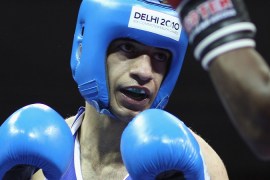 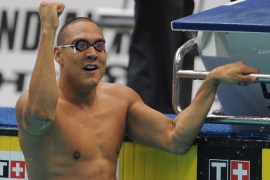 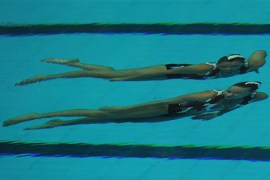 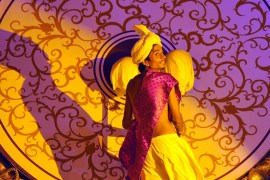