Israel’s top female tennis player Shahar Peer has spoken out after being the subject of protests at the Auckland Classic.

The 22-year-old has faced protests from a small group of around 25 people opposed to Israel’s policies towards Palestinians at the Auckland tennis complex throughout Peer’s matches this week.

Two protesters were arrested during the opening semi-final as the group made their presence felt using megaphones from a nearby public park.

The chants were so loud during Peer’s second round match against Magdalena Rybarikova earlier in the week that officials delayed it for 15 minutes after the first set as they discussed whether or not to continue.

Peer spoke out about the protests which she said affected her play.

“If it is because of where I come from, that’s not fair.

“I have nothing to do with politics. I am just a tennis player and I want to enjoy the tour like the other players.”

Peer was controversially refused a visa to play in Dubai last year, but the WTA have received written confirmation from the UAE tournament organisers that she has entry for this year’s Dubai Open.

Peer said she could not quite hear the protestors on centre court on Friday, as organisers played music throughout the breaks between games.

Peer said it had been an unpleasant experience though she was proud of the way she had dealt with it.

“For the whole week, again and again and again, and been asked about it and hearing them calling me to go out of the tournament, it’s not a nice feeling and not comfortable.

“I’m only 22 and to get those calls against me is not nice… but I am really proud of the way I handled it.” 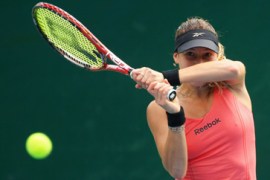