Crowd favourite Kim Clijsters was unceremoniously dumped out of the Australian Open third round in a shocking 6-0 6-1 thrashing by Nadia Petrova.

The 19th-seeded Russian had never beaten Clijsters, who is still in the early stages of her return from retirement, in their four previous encounters.

The much-anticipated quarterfinal between the back-from-retirement Belgians Clijsters and Henin dissolved in 52 minutes with the disappointing result.

Clijsters has not been on the receiving end of such a lopsided scoreline since losing the French Open final to Henin 6-0, 6-4 in 2003

“It sucks. It’s something you don’t want to happen too often,” Clijsters said after her performance.

“I have had a lot of days like this, trust me, but they just did not happen in my matches.

“I didn’t feel the ball at all. On the other hand she was good. But I made all the mistakes and she didn’t really have to do much.

“Tennis wise, I couldn’t bring what my head wanted me to do.

“What is more frustrating? Playing like this or getting beaten when you play your best?

“I lost because it was my fault. My opponent, okay, she was better, but I didn’t give her the best Kim out there today.”

Petrova had dominated the match from the very beginning, keeping Clijsters off balance with powerful ground strokes and a clinical service game that stunned the Hisense Arena crowd into silence.

Clijsters, who won the US Open last year and the Brisbane International title before the Australian Open began, won only five points in the first set and committed 17 unforced errors.

The Russian then continued her domination, winning the first game of the set to love and then giving up just two points on Clijsters’ serve in the next.

Clijsters appeared to have found her touch when she held a break point, but Petrova refused to allow her to capitalise.

The Belgian had been heading for a rare 6-0 6-0 defeat until the 10th game of the match when she finally held her serve.

Petrova broke again and while Clijsters was able to stave off two match points when the Russian was serving for victory, she was unable to stop her opponent’s irrepressible momentum.

Justine Henin, another Belgian who was inspired to return to the tour after a 20-month absence after Clijsters won last year’s US Open, did her part, with some difficulty, earlier beating Alisa Kleybanova 3-6, 6-5, 6-2.

Justine Henin will play Yanina Wickmayer in the fourth round.

Wickmayer, who is ranked No16 but unseeded because she was under a suspension – since overturned – for breaching the World Anti-Doping Agency’s “whereabouts rule” when direct entries closed for the Australian Open – advanced 6-1, 6-7 (4), 6-3 over Sara Errani.

Standing in his way is American John Isner, winner of the Auckland tournament last week for his first ATP title.

“I was just kind of riding a wave of momentum, and I still am,” Isner said.

“Hopefully I can keep it going.”

He held serve to take the match, closing with a forehand winner at Rod Laver Arena.

Roddick and Gonzalez will meet each other on Sunday in the fourth round, with the American holding an 8-3 edge in career meetings, including a straight-sets win the last time they met in the round of 16 at the 2008 US Open.

“For sure I have to play better if I want to beat him.”

Second-seeded Dinara Safina, the 2009 finalist, advanced with a 6-1, 6-2 victory over Britain’s Elena Baltacha.

Safina will have a more difficult assignment next round against fellow Russian Maria Kirilenko, who beat Italian Roberta Vinci 7-5, 7-6 (4).

Kirilenko had an upset win over 2008 champion Maria Sharapova in the opening
round.

“I think Sharapova hits it harder than Safina, so I am prepared for sure,” Kirilenko said.

Former No1-ranked Jelena Jankovic was upset 6-2, 6-3 by No31 Alona Bondarenko. 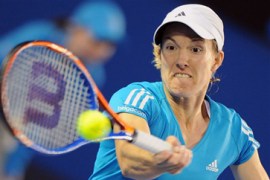 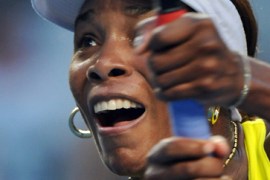 Federer survives scare in Australia Open as Serena lashes out at officials over fine. 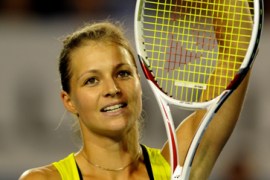 Sharapova out in round one

Former world no1 loses to Maria Kirilenko as Clijsters, Murray and Roddick all win. 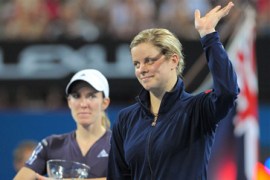 Women set to sizzle in Melbourne

Chris Tortise says clash of the comeback queens will make Australian Open one to watch.