Considered the most dangerous race on the planet, the Dakar Rally starts on Saturday with 378 drivers taking part in the second edition staged in South America because of security concerns.

Dunes, desert, mountains and other hostile terrain lie in wait for 138 cars, 161 motorbikes, 29 quads and 50 trucks in the 16-stage race that covers 9,030 kilometres across Argentina and Chile before finishing January 16 in Buenos Aires.

The symbolic start of the race will take place Friday, with a 349-kilometre drive from emblematic Buenos Aires monument, the Obelisk, to the city of Colon.

Racing begins the following day from Colon with a 684-kilometre first stage to Cordoba. Drivers then head to La Rioja and Fiambala in Argentina before going to Copiapo on January 5, the first Chilean city to host the Dakar, followed by Antofogasta, Iquique, La Serena and Santiago.

The race returns to Argentina, passing through San Juan, San Rafael, Santa Rosa and finally Buenos Aires. The only rest day in the 32nd edition of the Dakar Rally will be January 9.

BMW will have French driver Stephane Peterhansel behind the wheel, a six-time champion on motorbikes and three-time winner in cars of the Dakar Rally in Africa, plus Nani Roma of Spain.

“The Dakar is the hardest race in the world, you have to work hard and suffer a lot,” said Roma, the 2006 winner.

“But when you get to be champion, it’s worth it.”

Sainz, meanwhile, will be looking for revenge after leading the race in 2009 before being forced to retire following an accident, apparently due to an error in the map produced by the race authorities.

“I’m worried about the road book being correct,” Sainz said.

“It’s such a long race over so many days that you run into all sorts of obstacles. You have to be patient and prudent to solve them.”

Safety will be an important feature after Pascal Terry died in the last race.

The French motorcyclist died of a pulmonary edema on January 7 in the second stage between Santa Rosa and Puerto Madryn after reportedly only receiving help several hours after requesting it.

In another incident, Cristobal Guerrero of Spain had an accident in the 10th stage in the middle of the Atacama, the world’s most arid desert, and spent several days in a coma.

“At the side of the road were cars on fire, trucks turned on their sides. I was thinking: ‘What’s happening here?’ The cars accelerated even when they couldn’t see anything, they didn’t care. There was a lot of irresponsibility.”

In order to reduce accidents, organisers have decided to make motorbikes and quads race almost 100 kilometres less than the other vehicles, along with special sections to avoid crashes with cars and trucks and prevent the problems from 2009.

“Those that are in the lead don’t care (about the crashes). They look the other way and carry on,” said Patronelli, who came second in 2009.

“You could be dying at the side of the road and they would pass by at top speed.”

The rally was moved to South America in 2009 because of safety concerns and the possibility of a terrorist attack in Africa.

The 2008 race was cancelled after the deaths of four French tourists in Mauritania in December 2007. The deaths were linked to Al-Qaida. It was the first time the rally had been suspended since the first race in 1979.

After the cancellation, organisers vowed to prevent the rally disappearing and decided to move to South America. 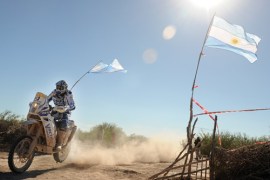