Samuel Eto’o scored a hat-trick for holders Inter Milan in the European Champions League but Lionel Messi’s return could not help Barcelona as they laboured to a draw with their Russian bogey team.

While Rafael Benitez celebrated a 4-0 victory over Werder Bremen and his first home win in Europe as Inter coach, Pep Guardiola’s Barcelona were forced to scrap for a 1-1 draw at Rubin Kazan in Group D.

Manchester United savoured a rare win in Spain when they beat Valencia 1-0 to go joint-top of Group C with Glasgow Rangers, 1-0 winners over Turkey’s Bursaspor, while troubled Lyon won 3-1 at Hapoel Tel Aviv to lead Group B.

While Eto’o was lighting up the San Siro, Tottenham Hotspur’s Rafael van der Vaart chalked up a different kind of triple when he missed a penalty, scored and was sent off in a 4-1 home win against Twente Enschede, taking his side level with Inter at the top of Group A.

There was no rivalling Eto’o for the performance of the night on Wednesday as the Cameroon striker scored two in a six-minute first-half burst, helped set up Wesley Sneijder for Inter’s third and completed his hat-trick nine minutes from time.

“I don’t know if it was their birthday today but we gave them too many presents,” seethed Werder coach Thomas Schaaf.

Where Inter shone as brightly as Eto’o’s brilliant yellow boots, Barcelona struggled with World Player of the Year Messi returning from an ankle injury.

The Spanish champions had to come from behind to salvage a point against the same unglamorous opponents who stunned the then-European champions 2-1 at the Nou Camp last season before a 0-0 home draw.

Messi, who scored twice in Barcelona’s opening group D match, came off the bench for the last half-hour but was unable to make the difference with Rubin keeper Sergei Ryzhikov denying the Argentine wizard late on.

Both goals came from the penalty spot, with captain Christian Noboa putting the home side ahead in the 30th minute and David Villa equalising on the hour.

FC Copenhagen pushed Barcelona off the top of the group, with striker Dame N’Doye returning to haunt his former club Panathinaikos, who had former Arsenal midfielder Gilberto Silva sent off, in a surprise 2-0 away win.

Villa’s former club Valencia, top of the Spanish Primera Liga, failed to convert possession into goals and paid the price against United.

With Wayne Rooney sidelined by injury but Rio Ferdinand returning, United’s new Mexican signing Javier ‘Little Pea’ Hernandez came off the bench to break the deadlock with a clinical finish in the 85th minute of an uninspiring match.

“When he takes his chances it’s like shelling peas, with either foot,” said manager Alex Ferguson, savouring what was only United’s second win in 19 away matches in Europe against Spanish opponents.

There were penalties galore, and plenty of rain, at Tottenham as the English side celebrated their first home game in the Champions League proper with their first win.

Dutchman Van der Vaart proved the tormentor of his compatriots before getting sent off with 29 minutes remaining.

Roman Pavlyuchenko made no mistake with two spot kicks either side of a goal from Twente’s Nacer Chadli and Gareth Bale wrapped up the scoring five minutes from time, with Spurs now level on four points with Inter, their next opponents.

In Group B, Schalke 04 netted two late goals in Gelsenkirchen to beat Benfica 2-0.

Lyon’s 3-1 win over Hapoel Tel Aviv in the other Group B game took them top with maximum points and gave embattled coach Claude Puel a welcome respite from his domestic woes. 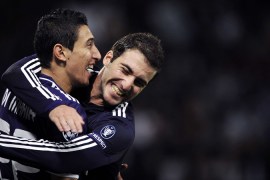 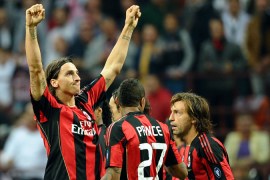 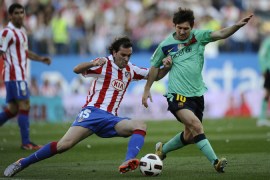