Inter Milan returned to the summit of Serie A after two goals each for strikers Diego Milito and Samuel Eto’o helped the Italian and European champions to an easy 4-0 win at home to Bari.

Cesena, top on goal difference above Inter at the beginning of Wednesday evening, conceded for the first time since being promoted, going down 2-0 at Catania.

It was also a night for Italy’s most coveted goalscorers to come to the fore as Milito, Fiorentina’s Alberto Gilardino and Antonio Di Natale all hit the net for the first time in this campaign.

After four games, Inter are on 10 points, one clear of Brescia and Chievo, who scored impressive wins at home to Roma, 2-1, and away at inconsistent Napoli, 3-1, respectively.

AC Milan and Lazio dropped points after a 1-1 draw in Rome where Zlatan Ibrahimovic opened the scoring only for Sergio Floccari to equalise for Lazio.

While Inter have won all of the last five titles, it is the first time former Valencia and Liverpool coach Rafael Benitez has enjoyed top spot in Italy.

“We played beautiful football because we have quality players – it’s nothing to do with the system we play,” said Benitez, responding to a question suggesting a more attacking approach than the Inter Milan of previous coach Jose Mourinho.

Benitez also praised the cool-headedness of Eto’o who converted two penalties to take his season’s tally to five.

“Eto’o is taking the penalties because he’s full of confidence. It may be different later in the season and maybe Milito will take them then.”

Without Javier Zanetti, injured for the first time in five years, Inter were given a scare after just 20 seconds when Abdelkader Ghezzal crossed for Sergio Almiron to shoot against the post.

But Wesley Sneijder was among the Nerazzurri ranks and the Dutchman was soon pulling the strings in midfield.

It was Eto’o though who created the first goal, beating his man and then crossing from the left for Milito, rediscovering his predatory instincts, to thump in a header from inside the six-yard box on 27 minutes.

Inter were handed the second goal when Marco Rossi handled an innocuous Sneijder cross four minutes after the restart with Eto’o sending Jean Francois Gillet the wrong way from the resulting spot kick.

Ghezzal almost pulled a goal back for Bari on 56 minutes, firing just wide from the edge of the box, but the game was over seven minutes later when Lucio tumbled in the box to win Inter a second penalty.

Eto’o sent Gillet the wrong way a second time from 12 yards, this time slotting the ball into the opposite corner.

After Julio Cesar turned over a fierce drive from Alessandro Parisi, Milito ran through to grab his second and Inter’s fourth with a cool finish with four minutes to go.

In Rome, Ibrahimovic and Hernanes both went close twice in the first half before the Swede ran onto a precise Clarence Seedorf pass to round Fernando Muslera and slot in the net on 66 minutes.

But nine minutes from time, Hernanes crossed for Floccari to volley home and give the home side a fair share of the points.

Elsewhere, there were 1-1 draws between Genoa and Fiorentina and Lecce and Parma while Cagliari and Sampdoria, missing Antonio Cassano, failed to muster a goal. 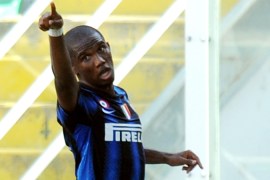 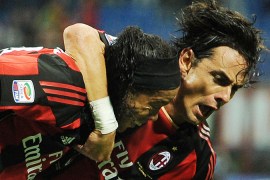 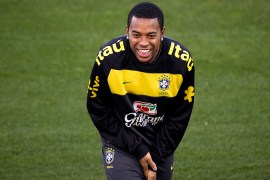