Dimitar Berbatov scored a hat-trick as Manchester United beat Liverpool 3-2 at Old Trafford despite the visitors fighting back from two goals down.

The Bulgarian stamped his class on a match that United manager Alex Ferguson had described as the top fixture in any English Premier League season.

It was the first United hat-trick against Liverpool in more than 60 years, since Stan Pearson hit three on September 11, 1946.

After opening the scoring with a header after some poor marking from opposing striker Fernando Torres three minutes before half time, Berbatov scored a contender for goal of the season after the break.

He tipped up a cross from Nani on his knee before executing a perfect overhead volley over Pepe Reina and into the net off the bar.

Jonny Evans then made a needless tackle on Torres to hand Steven Gerrard the opportunity to level from the spot on 64 minutes.

The Liverpool captain didn’t miss, and six minutes later equalised when Darren Fletcher was tricked into creating a gap in the wall after John O’Shea had given away a free kick for a trip on Torres.

But Berbatov nodded home the winner with six minutes to play to give United three points after dominating most of the match.

“We should have had 10 – it was a travesty of a scoreline,” Ferguson told Sky Sports.

“They (Liverpool) didn’t offer anything and they had some decisions from the linesman to get back into the game.”

Berbatov has had his critics since a big-money move from Tottenham Hotspur at the beginning of last season but Ferguson said he had always had faith.

The Bulgarian has six league goals from five matches this season.

“There was a lot of criticism of him in the media last season but that sometimes happens when we bring in a player for a lot of money and he doesn’t score a hat-trick every game,” said Ferguson.

“This season he has started off in the right fashion but there’s never been any doubt over the quality of the man.”

Liverpool boss Roy Hodgson, whose side slip to 16th in the league with five points, said his players needed to have steadier nerves late in the match.

“We made a really good effort in the second half to bring us back into the game, and if we had a bit more composure we could maybe have seen the game out,” he said.

United move onto 11 points, four behind Chelsea who opened up a gap at the top when they beat promoted Blackpool 4-0 at Stamford Bridge, with all the goals coming in the first half.

Salomon Kalou scored unmarked from a corner with just over a minute played before Florent Malouda converted another simple chance 10 minutes later.

Didier Drogba then scored from outside the box despite falling down as he shot on half an hour before Malouda displayed perfect technique to drill a left-footed shot past Matthew Gilks four minutes before the break.

The promoted Seasiders improved in the second half and created several decent chances but it proved to be a cruise for the Blues.

Manchester City moved into fourth behind United with a 2-0 win at Wigan Athletic courtesy of goals from Carlos Tevez and summer signing Yaya Toure.

Wigan remain in the bottom three on four points with the worst goal difference in the league at minus 11.

In Italy’s Serie A, Samuel Eto’o shone yet again with both goals in Inter Milan’s 2-1 comeback win at Palermo to send the champions joint top on Sunday.

After three games Inter are level on seven points with promoted Cesena who beat Lecce 1-0.

Meanwhile, Juventus, whose poor form last term had continued into the new season, bounced back with a 4-0 win at pointless Udinese.

In La Lega ten-man Valencia made it three wins out of three and climbed to the top of the Spanish standings when Juan Mata and Pablo Hernandez scored in a 2-1 win at promoted Hercules. 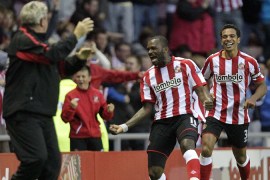 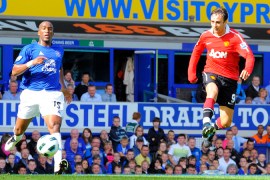 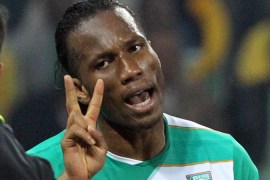 ‘Unready’ Drogba not giving up

Chelsea striker says he will still play for Cote d’Ivoire despite being dropped from Africa Cup of Nations qualifier.