World Champions Spain had more goals put past them than in any match in the last decade as they lost 4-1 to Argentina in a friendly at the Monumental in Buenos Aires.

It was the first defeat for the planet’s most dominant team since they added the World Cup to their European title in July.

And it gave some pride back to the home side having crashed out of the World Cup 4-0 to Germany in South Africa this summer.

Starting instead of first-choice Iker Casillas, Liverpool goalkeeper Reina played a part in each Argentina goal.

Messi lobbed him in the 10th minute and Higuain beat him from a sharp angle in the 13th.

Tevez scored after half an hour as Reina slipped trying to clear a ball.

Fernando Llorente scored in the 84th for Spain, and Sergio Aguero made it 4-1 for Argentina seconds into second-half injury time.

“Argentina was the reason that Spain was not the Spain we are used to seeing,” said the home side’s interim coach Sergio Batista, who replaced Diego Maradona after the World Cup.

“We beat a great team, and things went like we had hoped.”

Spain had not allowed four goals since a 4-1 friendly defeat to Germany in August 2000.

“It did not surprise me that Argentina was better than us, particularly in the first half,” La Furia Roja coach Vicente Del Bosque said.

“We lost with dignity, and we are not looking for excuses to devalue Argentina’s victory.”

It was the second victory for Batista, who took over from Maradona following a 4-0 loss to Germany in the World Cup quarter-finals. 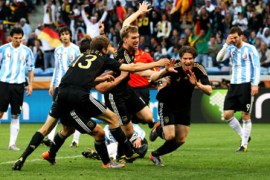 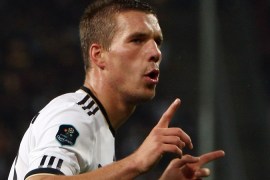 French get first win in six as Germany, England, Italy and the Dutch all win Euro 2012 qualifiers but Portugal lose. 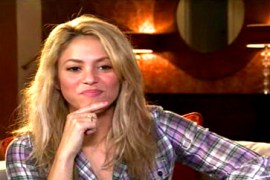 Colombian singer tells Al Jazeera how the power of football can bring people together.