Dani Pedrosa seized  the lead on the seventh lap and then fended off a fierce challenge from American Ben Spies to post his third MotoGP win of the season.

But the Indianapolis race was overshadowed by the death of a a 13-year-old motorcycle racer was run over and killed Sunday after falling off his bike during a warmup lap at Indianapolis Motor Speedway.

After his crash, Lenz was struck by a 12-year-old racer who was not hurt.

Lenz was taken off the track in a stretcher and rushed to a  nearby hospital where he died three hours later.

“On behalf of the Lenz family, we would like to thank Peter’s  friends and supporters for all their help throughout the years,” the  family said in a statement.

“We are deeply saddened by this tragic loss, but know Peter is racing even faster in the sky.

“Our thoughts and prayers are now with the other racer and his family, who were also involved in this tragedy.”

In the MotoGP, Jorge Lorenzo of Spain, who won the race here last year, had his worst finish of the year when he placed third.

Lorenzo, well on his way to a world championship, finished over 12 seconds behind the winner in a bid for his eighth victory of the year.

With six races remaining, Lorenzo has accumulated 251 points. Pedrosa is second at 183 and Italian Andrea Dovizioso is third with 126.

Spies, starting on the pole for the first time in his rookie season, held the lead for six laps. 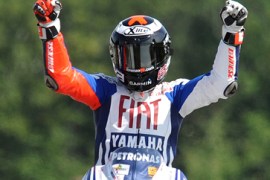 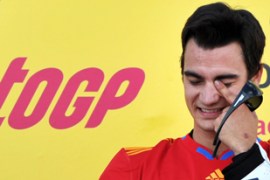