Nine players who took part in France’s World Cup rebellion, among them goalkeeper Hugo Lloris and winger Florent Malouda, have been picked for the Euro 2012 qualifying campaign.

New coach Laurent Blanc had left out all 23 members of the World Cup squad for his first match in charge, a 2-1 defeat by Norway in a friendly in Oslo on August 11.

Nine return for the qualifiers against Belarus on September 3 in Paris and Bosnia four days later in Sarajevo, although the 21-man squad remained somewhat experimental with four uncapped players.

Blanc, who took over from Raymond Domenech after the World Cup and is trying to rebuild the team after their shambolic performance in South Africa, called up Lorient striker Kevin Gameiro for the first time.

The other uncapped players on the list are goalkeeper Cedric Carrasso and defenders Mamadou Sakho and Benoit Tremoulinas.

None of the five players banned from one to 18 matches for their role in the World Cup revolt were on the list, including midfielder Jeremy Toulalan, who was suspended for one game and could have played the second qualifier.

Blanc also had to make do without playmaker Yoann Gourcuff, serving suspension after picking a red card in France’s last match in South Africa.

France made a group-stage exit from the World Cup after boycotting a training session in support of striker Nicolas Anelka, who was banished from the squad for insulting Domenech. 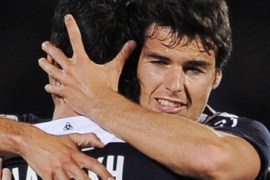 Lyon’s new signing from Bordeaux lines up against dad in first Ligue 1 match for his team. 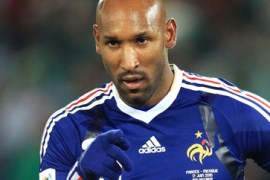 Anelka: ‘You are all clowns’

French striker tells newspaper that 18-match ban was given ‘to entertain the public’. 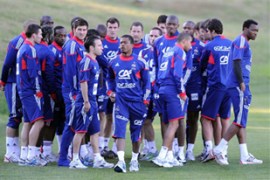 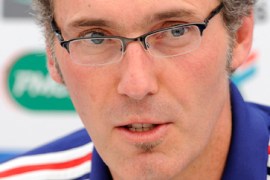