American Marion Jones’ 200 metres gold medal and long jump bronze from the 2000 Sydney Olympics were reallocated by the IOC on Wednesday who decided not to redistribute her 100 gold.

The International Olympic Committee refused to give Jones’s 100 gold medal to silver medallist Katerina Thanou due to the Greek’s own involvement in doping, in what an IOC spokesman said was an unprecedented move.

Jones was stripped in 2007 of her 100, 200 and 4×400 gold medals and her long jump and 4×100 bronzes after admitting using banned drugs. She served a six-month jail sentence for lying to
federal prosecutors about her steroid use.

Thanou missed a third doping test on the eve of the Athens 2004 Games and still faces charges in Greece of misleading authorities and staging a motorcycle accident to avoid that test with fellow Greek sprinter Kostas Kenteris.

“The IOC believes we have a strong moral case and good legal case for that,” said IOC spokesman Mark Adams, adding he believed it was the first time a gold medal spot had been left vacant.

“She (Thanou) disgraced herself and the Olympic movement by avoiding three doping tests. We are not legally bound to give medals,” Adams told reporters after an IOC Executive Board meeting.

“It is a case of taking no action. We have decided not to give her an honour that we don’t think she deserves. It was a disgraceful behaviour by her and this is a unique situation.”

Thanou, who was banned by the IOC from competing in the 2008 Beijing Games for bringing her sport into disrepute, is joined as a silver medallist by Jamaican Tanya Lawrence, who moves up from third.

Merlene Ottey, who competed for Jamaica at the time and later raced for Slovenia, is lifted to bronze.

Ottey, who was 40 at the time of the Sydney Games, has now won six bronze and two silver medals in seven Olympics.

Pauline Davis-Thompson of the Bahamas, who won the 200 metres silver medal is upgraded to gold and Susanthika Jayasinghe from Sri Lanka moves up to silver with Jamaica’s Beverly McDonald getting the bronze.

Russian Tatyana Kotova has been given the long jump bronze medal.

The International Association of Athletics Federations on Wednesday removed Jones’ name from the Sydney Games final rankings but had yet to upgrade the other athletes.

An appeal by Jones’s relay team mates, who were also stripped of their medals because of her admission of doping, is still pending at the Court of Arbitration for Sport.

No decision will be taken on those medals in the meantime. 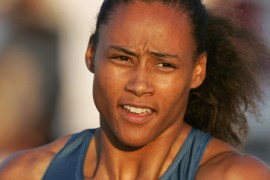 Jones in training for hoop dreams